Barely four days to the governorship elections, the All Progressives Congress, APC, has no governorship candidate in Enugu State.

It could be recalled that a Federal High Court in Abuja, had sacked Senator Ayogu Eze as the governorship candidate of the party in Enugu State.

In the judgment delivered by Hon. Justice I. Ekwo of the Federal High Court 5, the court asked the Independent National Electoral Commission, INEC, to recognize Barr. George Ogara as the candidate.

But several days after the judgement, it was gathered that the APC National Working Committee, NWC, was yet to obey the order of the court, which had asked that Ogara’s name be submitted to the INEC.

Ogara had told newsmen that he served all the relevant parties the court judgement, and wondered why they were yet to comply appropriately.

Following the development, the commission has now removed the name of the party’s candidate in its final list for the March 9 governorship election.

A check on the INEC final list as published in its website showed that Enugu APC had no candidate.

The list signed by Rose Oriaran-Anthony, Secretary, INEC, said it was in obedience to court order as the party was yet to submit a fresh name after Ayogu was sacked.

In the 330-page final list of candidates, Enugu occupied pages 100 to 111, with the APC having ‘NONE’ in the provision for candidate. 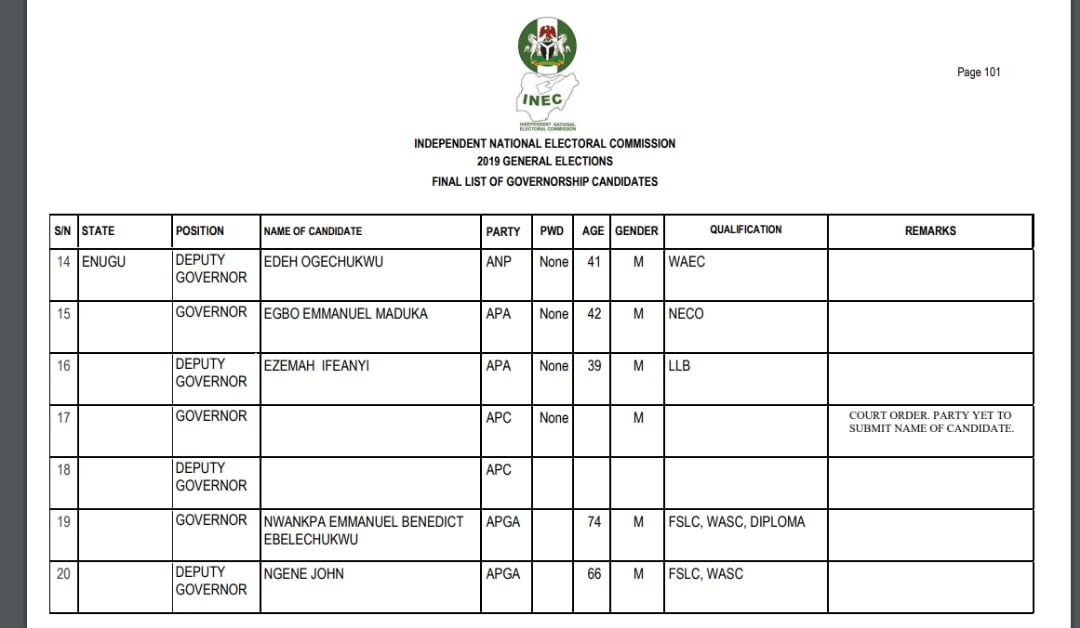