The General Overseer of The Redeemed Christian Church of God, Pastor E.A Adeboye on Friday, May 10, 2019 commissioned another ultra-modern Intensive Care Unit (ICU) at the Jos Specialist Hospital, Plateau State as part of the cardinal focus of the church’s Christian Social Responsibility (CSR) and in the fulfilment of its commitment “Help for the helpless, Hope for the hopeless, Food for the hungry, Strength for the weak.”

The commissioning event which had in attendance the Governor of Plateau State Simeon Lalong, the Special Assistant to the General Overseer on Christian Social Responsibility (CSR) Pastor Idowu Iluyomade and other senior Pastors in the Redeemed Christian Church of God was described as an outstanding feat from a faith-based organisation like the Redeemed Christian Church of God and one that is worthy of emulation. 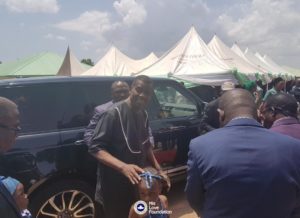 Speaking at the event, Pastor Adeboye expressed gratitude to God for granting the Church the enablement and also thanked the leadership of the Jos Specialist Hospital for receiving the church and allowing the development of the facility which in his words is a gift of love from the charity arm of the church; His Love Foundation, and prayed that through the facility many already considered to be in critical condition who are admitted into the facility would receive their healing and live and not die.

Also speaking at the event the Governor of Plateau State, His Excellency, Simon Lalong, commended the efforts of the Redeemed Christian Church and thanked Pastor Adeboye in particular for always being in the forefront of most noble initiatives the country has witnessed with regards to social responses targeted at bringing succor to the people regardless of race, colour, and religion. He expressed his gratitude to the leadership of His Love Foundation for considering the Jos Specialist Hospital in its choice of the next facility in the country to benefit from the good works of the foundation. 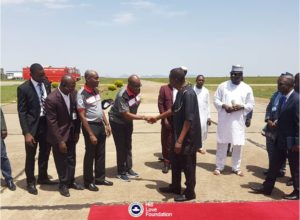 He recalled that the foundation having delivered a similar facility at the Lagos University Teaching Hospital (LASUTH) in 2017 and now chose Jos Specialist Hospital for the second of such facility to be developed in the country attest to the broadness of mind and reach of the church. Earlier Pastor Iluyomade had highlighted the other intervention programmes and projects of the church through the foundation which in his words are in response to the clarion call of Jesus Christ to every believer to be mindful of the sick, the poor, those in prison and the hungry. In his words, CSR is a matter of life and death and the church has committed itself to giving succor in 6 specific areas of health, education, feeding, social enterprise, rehabilitation, and prisons.

The Assistant General Overseer Education and Training, Pastor E.O Odeyemi in his goodwill remarks said the church has again lived up to the expectation of Jesus Christ with the development of the ICU in Lagos in 2017 and the newly commissioned in Jos. This he said is in addition to several other projects executed over the years in the areas of education and skills acquisition.

Pastor Sunday Akande, the Pastor in Charge of the region whilst thanking the General Overseer Pastor E.A Adeboye, the Governor of Plateau State, His Excellency Simon Lalong and the Special Assistant to the G.O CSR Pastor Iluyomade also expressed gratitude to the leadership of His Love Foundation for the good gesture and show of love for the State and by extension the region. He then called on the people of Plateau State to follow peace and continue to live harmoniously in love which is the bedrock of the charity works of the church and the message of Jesus Christ.