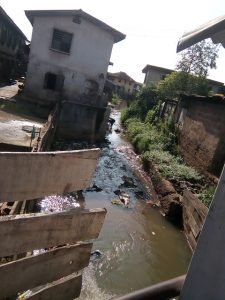 Abule-Otun Community, under the Abeokuta North local government area of Ogun state , made headlines after index cases of cholera reportedly broke out from a two-story building occupied by over 20 families.

Cholera is a bacterial disease causing severe diarrhoea and dehydration, which is usually spread in water. The disease becomes fatal, if not treated quickly.

In November 2019, the state’s ministry of health confirmed five deaths including a four-month-old baby and 33-year-old pregnant woman.

It was reported that the worst-hit areas in Abeokuta included Abule-Otun in Lafenwa, Kuto, Idi-Aba and Oke-Ijeun,all in Aneokuta, the state capital .

On a visit to some of the affected communities, findings showed that these rural communities lack health sanitation as residents battle with communicable diseases and infections like malaria, cholera, measles, fever, pox and diarrhoea.

Ogun State, between 2016 and 2019, has had increasing cases of infections ranging from cholera, measles and yellow fever as rural communities front line the outbreak.

AbuleOtun, despite its closeness to the Ogun river, lacks hygienic water for drinking, washing and cooking as most residents depend on a constructed well-water. This well-water, located in almost every house, is beside a stagnant drainage or a toilet.

Projects in the community are majoly facilitated by the contributions of the Community Development Association and Landlords association. In Spite of this effort, the poor environmental sanitation has continuously stunted the growth of the community.

“When we heard about the cholera cases in AbuleOtun, we were able to narrow it down to the house the person stayed. She was pregnant and was at the market when symptoms started”, Akeem Kareem, the Public Relations Officer, Lanfewa CDA recounted incidences.

“She was immediately rushed to the federal hospital. After treatment, she was discharged. Some days later, a team from the ministry of health and environment came. I went with them to the house of the woman where she was interrogated.

“The team came back to sanitize the environment, and likewise pour chemicals into the dug well-water, which they said was the cause of the disease.

“Although we had some cases but no one died from AbuleOtun as it was said by the news. The woman in question is still alive and gave birth safely.

“As a community, some of the challenges we have are bad toilet channels, linked into the river; bad water system; no waste disposal; flooding, which has collapsed several houses and polluted the surroundings.

“When we made our complaints to the state government, we were asked to organise reservoir tanks, but days later we heard in the news that we have been given water. We are used to getting lip promises without any actions from the government.”

Kareem, however, adds that the community pushes effort to independent health organisations for treatment as part of effort to reduce the illnesses among residents.

With several allocations on Health and environmental sanitation in the yearly budget, cases of communicable diseases are still prevalent in rural communities.

However, rural residents are calling on the state government intervention to developing adequate infrastructure and sanitation to solving persistent health issues. 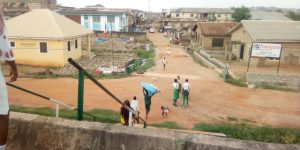 JUST IN: Trump declares himself winner of US election

Women could be wicked bosses to men if forced to, says Professor Petra

JUST IN: Trump declares himself winner of US election