After records of at least three different scandals were allegedly traced to three appointees of the Governor of Ogun state, Dapo Abiodun in less than two years in office, another Senior Special Assistant to the Governor has been alleged to be currently cooling his heels in prison custody in New York over financial fraud.

The Senior Special Assistant to the Governor, identified as Abidemi Rufai reportedly landed into trouble after a criminal complaint charging him with wire fraud for his scheme to steal over $350,000 unemployment benefits from the Washington State Employment Security Department was made.

The complaint alleges that Rufai fraudulently used the stolen identities of more than 100 Washington residents to file fraudulent claims with ESD for pandemic-related unemployment benefits.

Meanwhile, wire fraud is punishable by law in the United States of America and attracts up to thirty years in prison when it relates to benefits paid in connection to a presidentially-declared disaster or emergency, such as the COVID-19 pandemic.

It should however be recalled that Rufai was part of 28 persons announced by Governor Abiodun as appointees on 13 August, 2020.

QUESTIONABLE BACKGROUND CHECKS OF APPOINTEES
It should be noted that, the arrest of the Senior Special Assistant to Governor Abiodun will not be the first as several scandals still rattle some aides of the Governor in the present state cabinet. 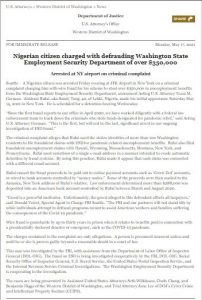 Osho was brought under fire after some irregularities were uncovered about her professional career as a lecturer and her sack from the Olabisi Onabanjo University, OOU.

Investigations conducted by PLATFORM TIMES revealed that the former Commissioner was sacked in 2016 for gross misconduct.

After series of agitation and protest, Osho was recused and replaced with the current commissioner for education, Prof Abayomi Arigbadu.

Barely one week after Osho was exposed by PLATFORM TIMES over the true status of her professorial cadre, another political appointee, Prof. Joseph Odemuyiwa was also alleged of certificate forgery.

PLATFORM TIMES reliably gathered that Odemuyiwa who is the Special Adviser to Governor on Education was reportedly dismissed from four different universities for an alleged gross misconduct and certificate forgery.

Investigation conducted by PLATFORM TIMES revealed that Odemuyiwa was alleged to be a serial certificate forger who has been going around with forged certificates.

It was learnt that the Abiodun’s appointee had been caught by management of different places he had worked with and which reportedly led to his dismissal from some university systems.

Like a trend gradually becoming a “curse”, another member of Abiodun’s cabinet who was the commissioner for environment, Abiodun Abudu-Balogun was accused by a 16-year-old secondary school student, Barakat Melojuekun of sexually harassing her in his private residence.

Barakat, who is a student of Victory Model College, in Ogun waterside local government area, made the allegation in a viral video posted on Facebook on January 2nd.

The underaged girl alleged that the commissioner connived with her uncle and a school teacher to lure her to his house, where he sexually harassed her.

The case of Rufai will be the fourth that will be happening since Abiodun took over governance in the state in less than two years.

Calls and e-mails were sent to Rufai but all to no avail as none was responded to as at the time of filing this report.

We are hungry, Police cry out over unpaid November salary