A Professor of Mathematics from Federal University of Agriculture Abeokuta (FUNAAB), Prof AbdulAkeem Agboola has been accused of falsifying his age, as findings by PLATFORM TIMES revealed that there was inconsistency in the credentials submitted by the University Don to the institution.

Documents and internal memo of the institution sighted by PLATFORM TIMES showed that the Professor of Mathematics truly has some secret in his cupboard.

It was also gathered that this has made the FUNAAB management set up a panel to investigate the alleged age falsification, among other suspicious allegations against the professor.

Following a reported petition by some certain people in the university, PLATFORM TIMES learnt that Academic staff Establishment Unit of FUNAAB during review discovered Agboola did not submit his birth certificate, M.sc and Ph.D certificate to the school’s registry.

PLATFORM TIMES learnt that this prompted the unit to write Agboola in an internal memo, asking him to submit his missing credentials to its building.

The internal memo which was obtained by our reporter dated 13th April, 2021 gave Agboola till 16th April, 2021 to submit the missing documents. 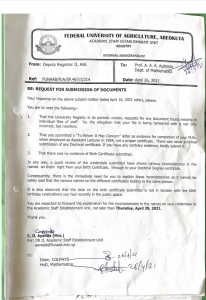 PLATFORM TIMES however discovered that Agboola replied the memo in a letter dated 16 April, 2021 where he described the request by the school’s establishment unit as “highly embarrassing and worrisome”.

Agboola in his reply explained that, since he joined the University in 1994, he had participated in at least two staff auditing exercises where originals and photocopies of his certificates were submitted apart from his PhD certificate which he submitted in 2002.

The professor further explained that all other documents were submitted in 1994 and had since been in his personal file with his department, college and registrar without any complaint from the registry.

The academician however obliged the unit’s request by sending the requested certificates as sighted by our reporter.

“It is highly embarrassing and worrisome for me to be written that I did not submit my birth certificate to the registry. Since I joined the services in 1994, I have participated in at least two staff auditing exercises where my originals credentials were shown to the panels and photocopies submitted.

“Apart from my PhD certificate which was submitted in 2002, all my other credentials were submitted in 1994 and they have since been inside my personal file in the department, college and register without any complain from the registry.

“I hope someone somewhere is not tempering and playing foul with my personal file in the registry.

“Consequent on your request I hereby resubmitted photocopies of following documents to the registry, birth certificate, M.Sc and PhD certificate”

The Establishment Unit however in another internal memo dated 26th April, 2021 and sighted by PLATFORM TIMES reporter however said Agboola’s response to its former memo was “incorrect and needless”.

The unit stressed that Agboola submitted a “To whom it may concern letter” as evidence for the completion of his M.sc when he was employed as an assistant lecturer in 1994.

Agboola was asked to present any contrary evidence to the claim by the unit.

The Unit also noted that after a quick review of the submitted credentials, it discovered a lot of inconsistency in the names on the birth certificate to his doctoral certificate, calling for an explanation from Agboola.

The Unit stressed that it also observed that the name on the birth certificate is not in tandem with 60th birthday celebration the Professor had in public place.

The Professor was however asked to forward explanation for the inconsistency on the name on the credentials submitted to the Establishment Unit’s building not later than April 29, 2021.

The Memo partly read “that the university registry in it’s periodic review, requests for any documents found missing in individual files of staff. 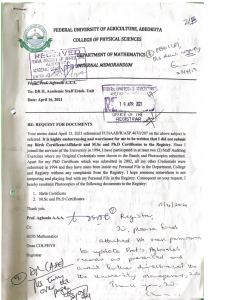 “So, the allegation that your files is being tempered with is not only incorrect,but needless.

“That you submitted a “To whom it may concern letter as evidence for completion of your M.Sc when employed as assistant lecturer in 1994 not a proper certificate.

“There was no evidence of birth certificate submitted

“In any way a quick review of the credentials submitted have shown various inconsistent in the names on them right from your birth certificate, though your doctoral degree certificate.

“Consequently, there is immediate need for you to explain these inconsistency as it cannot be safely said that various names on different certificate belong to the same person

“You are expected to forward the explanation for the inconsistencies in the name on your credentials to the academic staff establishment unit not later than Thursday April 29,2021”

An observation by PLATFORM TIMES on the documents submitted by Prof. Agboola revealed that there were obvious inconsistency in the documents.

Also, the birth certificate document of the embattled professor has Abdul Akeem Adesina Agboola as the bearer.

Also, PLATFORM TIMES obtained pictures of the Professor’s 58 birthday celebrated in 2018. This showed a discrepancy in the 1965 date of birth certificate the embattled professor is taking around , as his real year of birth supposed to be 1960.

Further findings by this reporter revealed that following the recommendations by Establishment Unit, the institution has reportedly set up an investigative panel to look into the alleged age falsification and inconsistency in the professor’s credentials.

It was however gathered that Prof. Agboola has been allegedly frustrating the effort of the panel.

PLATFORM TIMES gathered that the professor was against some of the people in the panel and has allegedly refused to face the panel since it was set up.

One of the panel members who pleaded anonymity said, “We suppose to sit last week on Prof. Agboola matter, but he has refused to show up.

“He is frustrating the panel so that we can change some people and put his own people there.”

When contacted on the allegations leveled against him, Prof Agboola insisted that he was not involved in any age falsification case.

His words ” If you can not reveal your source then keep it to your self, I am not involved in any age falsification case”.

2023: APC must give us youth as presidential candidate, Afenifere group insists

Two Platformtimes reporters, 48 others trained on managing insecurity while carrying out dangerous assignments

Why paracetamol is not a cure – Experts

Its time to take action against insecurity in Benue ,says Ortom

Wife of  my manager kidnapped three weeks ago, Obasanjo laments

You can resume nightlife in Imo, say  Police

Two Platformtimes reporters, 48 others trained on managing insecurity while carrying out dangerous assignments