In appreciating the efforts of the Ogun State Commissioner for Agriculture, Dr. Adeola Odedina, the Association of Nigerian Authors, has honoured the commissioner with an award of excellence for his commitment in improving the agricultural sector of the state.

The Agric commissioner was decorated as the “commissioner of the year” by the ANA executives during a visit to his office to mark the Children’s Day celebration.

The ANA state chairman, Engr. Paul Oni while presenting the award to the commissioner noted that Odedina has turned around the agricultural sector.

He stressed that the commissioner has been a supporting pillar to the association.

Engr Oni said, “we have benefited in many ways in this agricultural prowess shown to us. We don’t know we have this power.

“We wish you more greatness so that you will still do more for us”.

On his part, the Commissioner, Dr Odedina said the plan to make agriculture a culture to children has been looked into by his administration. 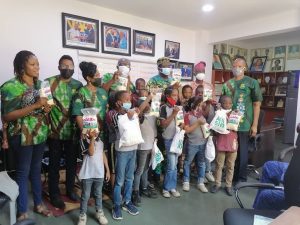 The Commissioner noted, “One of the agricultural initiatives as advised by the state governor, Prince Dapo Abiodun is that we should catch them young. And one of the thing we are doing is to work with ministry of education so that we revive the young farmers club in schools.

Its time to take action against insecurity in Benue ,says Ortom

Wife of  my manager kidnapped three weeks ago, Obasanjo laments

My government has Lifted 10.5m Nigerians Out Of Poverty In Two Years – Buhari