...purported statement of result not from us, OOU denies

A Chairmanship aspirant of the All Progressive Congress (APC), Obafemi/Owode Local Government,for the forthcoming LG election, Ogunsola Adesina has been accused of ‘forgery and fraud’ of certificate. 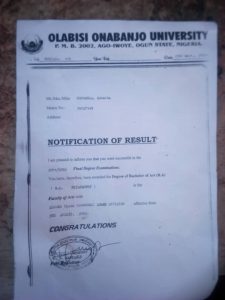 The purported certificate which was obtained by PLATFORM TIMES shows that the aspirant has second class honour (lower Division) B.A philosophy from the then Ogun State University(now Olabisi Onabanjo University).

It was also revealed in the credentials submitted by the aspirant claimed to have attended OOU between 1997 and 2002. 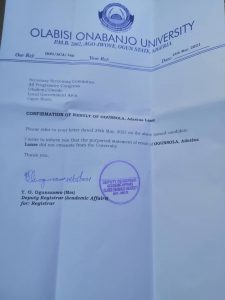 But, another letter by the institution to ascertain if the statement of result truly emanated from the school written to the APC screening committee in Obafemi Owode LG revealed that, the purported certificate presented by Adesina was forged.

In a letter signed by the school Deputy Registrar (Academic Affairs), Y. O Ogunsanwo(Mrs) and obtained by PLATFORM TIMES denied knowledge of the certificate being paraded by Adesina.

The letter reads: “I write to inform you that the purported statement of result of Ogunsola, Adesina Lanre did not emanate from us”.

Meanwhile, a Group of the APC, Integrity Youth raised the allegations after findings revealed that the aspirant’s certificate is inconsistent and forged.

The Group, have however cautioned the Ogun State Governor, Dapo Abiodun (APC) not to “force a fraudster” on the local community. 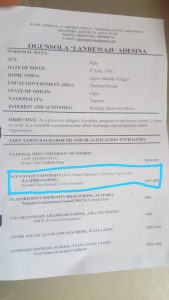 In a release by the Group signed by its Secretary, Tunji Adegbola reads:”the said Ogunsola Adesina Lanre did not posses any certificate or statement of result from the Olabisi Onabanjo University, OOU, as claimed by him, in the documents submitted to the screening Committee of the All Progressives Congress of Obafemi/Owode which went further to clarify from the institution”, the release stated

The APC Integrity Group added that , “this can be proven with a letter of response from OOU which was signed by its Deputy Registrar, Mrs Y.O Ogunsanwo on behalf of the Registrar “indicating that the said statement of results submitted to the Screening Committee and for which clarification was sought did not emanate from the University”.

Furthermore, the Group noted that the people of Obafemi/Owode Local Government are well known for their integrity, honesty and sincerity, and not to tarnish that image, they will not allow a ‘fraudster’ to be made their Chairman.

“Some power brokers in the Party of wanting to force the aspirant on the local government by presenting his secondary school certificate and withdrawing the contentious OOU statement of result.

“Leaders in the LG are against this, with a foresight that it would be another bitter pill for the governor if such certificate forger was made the chairman of Obafemi-Owode Local Government Council as experienced by the present administration in the past”, the group in the release concluded.