… asks court to declare it winner of 20 LGs seats

The New Nigeria People’s Party, NNPP,
says it has dragged the All Progressives Congress before the Federal High Court of Nigeria, sitting in Abeokuta and instituted 20 different suits, Local Government by Local Government, to correct this anomalies in the just concluded council polls .

The NNPP made this known at a press briefing on Tuesday, accusing the state governor, Dapo Abiodun and APC of involving in fraudulent acts during the LG Election by colluding with the Ogun State Independent Electoral Commission, OGSIEC. 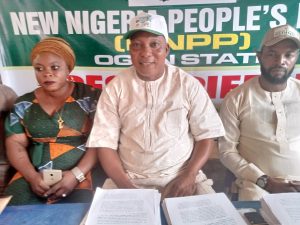 Speaking at the event, NNPP State Chairman, Comrade Olaposi Oginni disclosed that NNPP the party has hope in the Judiciary arms of government noting that with the evidences available , the court verdict will be in favour of the NNPP.

His words :”We know that there is no any candidate that APC filled in this election has passed through the test of time and the constitution of the Federal Republic of Nigeria and that of the Electoral Act.

“We have the approached the Federal High Court of Nigeria, Ogun state division. We have instituted twenty different suits, Local Government by Local Government, to correct this anomalies.”

Oginni further stated that under the Electoral Act which states the eligibility of party to contest election, that the APC is not qualified.

He recalled and noted that APC has no party executive but went into the election with three-man caretaker committee overlooking the party affairs.

“Our point and position is very clear that APC has no capacity and legality on the frame wall even to present candidate for the local government election.

“We will all recollect that on December 8th, 2020,the APC National Executive Committee dissolved Ogun state APC executive, and since then, they have appointed only three-man caretaker committee to take care of the affairs of the party in interim. And up till today, there was not any remedy to correct this anomaly. They now went to contest in this election thinking that we are in a banana republic where God will not take His course.

“Therefore we want to say none of the APC candidate is qualify to contest the Local Government election in the face of law and the Electoral Act.”

The seven-month old party, NNPP, reiterated that it is the only party that filea the lawsuits.

He said “There is no other party contesting with them. It is between APC and NNPP. We have our facts, figures and video evidences and by the time we get into court with them, we know they are going to fall. Even this OGSIEC officials that they use in rigging are going to be candidate of prison.”

Cholera spreads to 18 more states, as death toll rises to 479