We are not in support of Igboho’s agitation, his case should be sorted in Benin republic – Yoruba youths

Some Yoruba youths have said they are not in support of Sunday Adeyemo‘s agitation for a Yoruba nation, adding that “we are better and stronger together.”

The groups under the aegis of the Yoruba Youths Parliaments opined that Nigeria is too big to fail in the name of any agitation.

They however noted that this is not enough reason to hand over Igboho’s life to the Nigerian government.

Sunday Igboho, who is currently facing charges in Cotonou, Benin Republic, has been asked to be remanded in prison custody following a passport forgery allegation levelled against him by the Benin Republic government.

Speaking on Tuesday in Abeokuta, at the sideline of an award conferment on the Group Managing Director of Ojulowo-Omoluabi Empire Holdings, Victor Eniola Mark, the Speaker of the Yoruba Youths Parliament, Olaleru Folorunsho, emphatically stated that although, the Yoruba youths are not in his (Sunday Igboho’s) support, the Federal Government should temper justice with mercy. 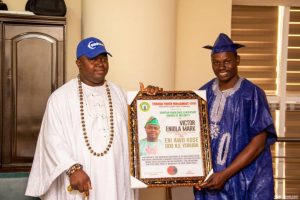 He added that if their will be a secession struggle by the Yorubas, it must be led by the monarchs.

His words, “We are not in support of the secessionsit agitation. Any agitation that will cause discord will not get our own support. We have said this before and we know that it will get to this level. If any agitation will be embarked upon, it should be led by our monarchs.

“I agree that the matter should be resolved over there in Cotonou, while I will also beg the Federal Government to temper justice with mercy. Although, we do not support that agitation, but we won’t, as a result of that, hand over his life to the government. Because, if he is asked to come and face the wrath of the law here in Nigeria, protest will start again and there will be destabilisation in the country and this is what we don’t want as ‘Omoluabis’.

“We have started making some moves. In fact, I was in Benin Republic yesterday in solidarity. In fact, we were there with delegates of the Olubadan, even although we were not allowed into the court. So I will only beg our elders and government to please temper justice with mercy”.

Responding, the recipient of the award, Mark noted that there is no other option to achieving a sustainable peace other than dialogue in the country, adding that all should return to the negotiating table. 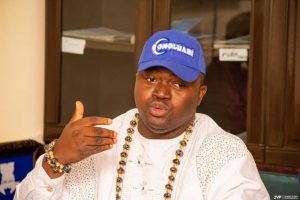 “I like the fact that over and over again, you kept on saying something that is important to our existence and togetherness as human.

“I am a Yoruba man and I love that fact. But we are human before we can be called a Yoruba ,an igbo or a Fulani or an Hausa. What keeps us together is more than any other thing. If we continue to divide ourselves, it will get to a point where we would begin to divide into smaller units.

“I am an advocate of peace, I believe whenever there is a form of disagreement it should be discussed and resolved. Youths just like myself should begin to eschew violence. Let us begin to discuss with people and not just get angry and take up arms.

“There are different ways to achieving the same result, but what is key is adequate dialogue. I love Yoruba so much but I do not believe in we breaking up and renaming ourselves,” he said.