The immediate-past Governor of Imo state and Senator representing Imo West Senatorial District, Senator Rochas Okorocha has pledged to establish a school in the border town of Ogun state for the less privileged and orphans . 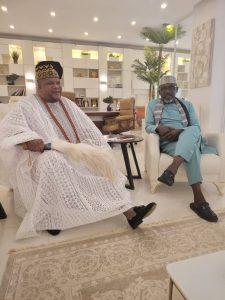 Okorocha said this shortly after he was offered the chieftaincy title of Otunba Asoludero of Iselu Kingdom by the Eselu of Iseluland ,Oba Akintunde Akinyemi in Yewa-North local government area of Ogun state.

According to Okorocha, the proposed beneficiaries of the school and the foundation ,would be the orphans and less privileged children in the border town in the state . 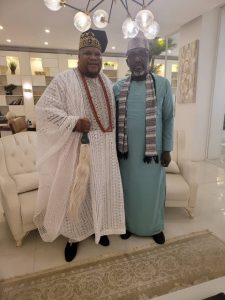 Okorocha who accepted the chieftaincy title , said he would reciprocate the gesture by extending the tentacles of his 25-year-old foundation to Ogun state .

Okorochas said since 25-years he began the foundation ,he had given scholarship to 25,000 less privileged Nigerians including five thousand Yoruba students.

He said “I am happy and grateful for this honour . I have accepted this chieftaincy tittle offer from you and will ensure that I do something through my foundation .

“Kabiyesi wants me to establish a school and launch my foundation in the kingdom ,that I will do .”

Okorocha said the gesture will improve the standard of education within and around the border town. 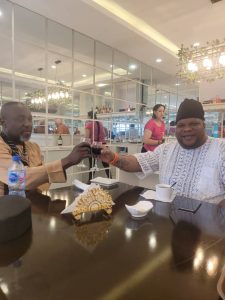 Oba Akinyemi in his remarks said the chieftaincy title of Otunba Asoludero of Iselu Kingdom in Ogun state would be confered on Okorocha .

The monarch said he had notified the state government through a letter to the Ministry of Local Government and Chieftaincy Affairs on the plan to confer the tittle on Okorocha . 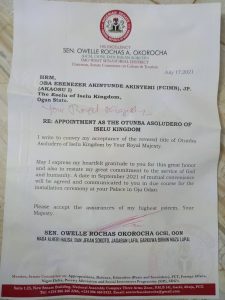 The first class monarch said the recipient of the title has over the years exemplified a track record of unifying people of different tribes across the country through philanthropical gestures.

He noted that the awardee who recently bagged a traditional title in Daura, Kastina state, from the Emirs in the homestead of the President, Major General , Muhammadu Buhari (rtd.) is a bridge builder.

He said “despite the happenings in the country, we have been able to identify a de-tribalized Nigerian who is concerned about the well being of every Nigerian irrespective of their colour, tribe and religion. 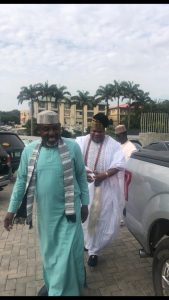 ” We hold Senator Rochas Okorocha in high esteem for that which he recorded in Imo state as a former governor and the lofty heights he has attained through the Rochas Okorocha Foundation that has offered no fewer than 25,000 less privilege and orphans free scholarship from primary school to university education.”

” We are optimistic that this new task will set Oja Odan, Ogun state and by extension Yoruba land into greater heights.” he said.

The Monarch said he was impressed that Okorocha has pledged to establish a school in the border town for the less privilege and orphans.

Oba Akinyemi said the gesture will help improve the standard of education within and around the border town.

The monarch said the ceremony will serve as an avenue to promote the rich cultural heritage of the Iselu Kingdom amidst pomp and pageantry.