One injured as Abiodun,Amosun hold parallel congresses in Ogun

Pandemonium broke out early on Saturday morning during ward congresses held by the All Progressives Congress in Ogun state when loyalists of the state governor ,Dapo Abiodun and Senator Ibikunle Amosun clashed . 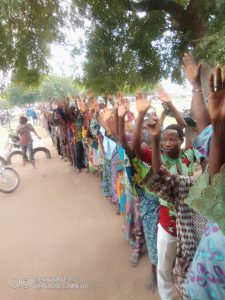 A party member was attacked with stone at ward 11 in Abeokuta South Local Government Area.

Also ,there was almost a clash between the two groups when a former House of Representatives, Mikky Kazzim was chased away from a ward in Abeokuta North LG.

Kazim, who represented Abeokuta-North, Obafemi-Owode and Odeda federal constituency is one of Amosun’s aides.was seen in a viral video being humiliated by loyalists of Abiodun .

Kazim was said to have allegedly gone for the congress different from his ward.

“Mikky, you are not a member of this ward. This is not your ward. Do you want to create violence here?,” a loud voice was heard while other party stalwarts shouted, before the former lawmaker made a U – turn.

Our correspondent who monitored the exercise in the state observed that party leaders from both camps stormed their wards with prepared list of executives and adopted it after the head count of the party members in attendance.

The Caretaker/Extra-Ordinary Convention Planning Committee (CECPC) of the party had warned against any move by members or group to organise a parallel congress.

The Secretary of the Caretaker Committee, Senator John Akpanudoedehe, in a two-page notice in Abuja, to all members on Friday, said such individual or group risk being sanctioned.

In flagrant disregard to the warning, the two political leaders who had been at loggerheads over the party structure, conducted parallel congresses on Saturday.

Our correspondent observed that the two camps came to the ward congress venues with prepared lists containing names of the executives, and merely adopted after head counts of APC members on ground.

In Ipokia Ward 1, the two groups had earlier converged on Ipokia Local Government Primary School, Alaga for the congress.

It was gathered that the Dapo Abiodun group later left the school premises for their party secretariat at Aniwajoye house.

In Ogun East, our correspondent gathered that Abiodun and Amosun groups held separate congresses in Wards 7, 9 and 10 in Ijebu North Local Government Area.

In Iperu Ward 3 in Ikenne Local Government, Abiodun took part in the congress, describing the exercise as peaceful.

The governor said the Congress in his ward was a consensus arrangement which was ratified through an electoral process, assuring party faithfuls that he would ensure that the ward is empowered to perform it’s duties.

Abiodun said “What we are doing here today is in line with what the caretaker extraordinary committee on convention planning has prescribed that we do in other to put our house in order in APC.

“We appreciate that what we had thus far for a few months are caretaker committees at different organisational levels of the party from the ward to the local government to the state and the national.

“So, basically, what we are doing is the beginning of the house keeping exercise to ensure that we have people who are properly voted into office that will now become substantive office holders from the ward levels and up.”

Over 200 Army officers to write exams in Kaduna

Over 200 Army officers to write exams in Kaduna