The Special Assistant to the Governor of Ogun State on Information, Communication and Technology Innovations, Hon. Dennis Akinwale Ogunnaike has assured the people of Ifesowapo Zone in Odogbolu Local Government Gov Abiodun promised not to exclude them from the developmental agenda of the present administration.

Hon Dennis Ogunnaike made this known last Friday during the construction and installation of Party and National flags at the Secrtariat of the All Progressives Congress in Wards 1 and 2 of Imosan and Imodi respectively in Odogbolu local government.

Hon. Dennis who hails from Erinlu, Ward 2 of Odogbolu Local Government said the hoisting of the flags exercise is in commemoration of Gov Abiodun’s giant strides at harvesting all opposition figures within the state into the dominant party; the All Progressives Congress, with his methodical style of Governance.

This the APC chieftain claimed is a feat that has never been achieved by any sitting governor since the return of democracy to Nigeria.

Quoting from the book of Proverbs Chapter 16 verse 7, he describes the Governor as a Man whose ways pleases the Lord whereby He (the Lord) has made all his enemies to be at peace with him.

He further mentioned that the party flag among others symbolises influence, power, authority and responsibility.

Ogunnaike, who is a close aide of the Governor emphasised that the yearnings of the people of Ifesowapo for various government’s intervention within the zone especially in the areas of roads, just like the cry of children of isreal to God, has reached Gov Abiodun’s table and that in no distant time, various interventions by the state government would soon become noticeable across the zone.

He thanked the people for their continous support to the present administration and the continous endorsement of APC as evident in the massive turn out witnessed in the recently conducted local government elections.

He maintained that the governor is not relenting in his determination at ensuring that no part of the state will be left untouched.

He said the Government in just about 2 years in office has done tremendously well citing the construction of the Epe to Ijebu-Ode road as an example in which Odogbolu Local Government is a major beneficiary. 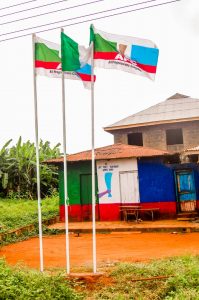 The road according to him has opened the local government to the largest economic cluster Trans-Africa while it he as also opened up different zones within the LG to a much desired industrial revolution and unlimited investment opportunities.

He affirmed that Government is resolute in delivering on the Infrastructure, Social Well

-Being, Education, Youth Empowerment and Agriculture (I.S.E.Y.A) Mantra and would leave no stone unturned towards the actualisation of this mission.