The panels on Thursday ,were inaugurated by the Chief Judge of the State, Justice Mosunmola Dipeolu on Thursday, following the demands of the oppositions to set up election petition tribunal to address their allegations of irregularities .

It would be recalled that the New Nigeria Peoples Party and Action Alliance had sanded the setting up of election petition tribunal to hear the alleged irregularities raised by them . 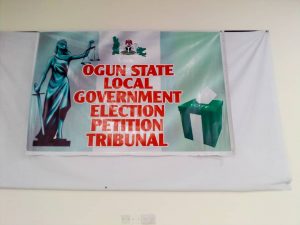 The opposition parties had also mounted pressures on the state judiciary for its failure to set up tribunal more than one week after election results were announced.

The ruling All Progressives Congress (APC) swept all the 20 chairmanship and 236 councillors seats in the council polls held on July 24.

Apparently bowing to the pressures, Justice Dipeolu on Thursday inaugurated the two panels of LG Election Tribunal to allow opposition parties seek redress over the outcome of the election.

The CJ inaugurated members of the two tribunals at the State High Court complex, Kobape, Abeokuta.

The second panel, was chaired by Otunba Rotimi Onafadeji while Mr Rabiu Olarenwaju Ibrahim and Mrs Adedoyin Adijat Alaba would serve as members.

Justice Dipeolu cautioned members of the panels against delay, while urging them to discharge their duties in line with the provisions of the law.