President of the Dangote Group, Aliko Dangote has charged media practitioners on professionalism and high ethical standard in the discharge of the duties as the watchdog of the society. 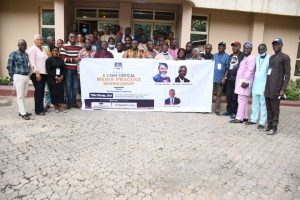 He gave the charge in Abeokuta during a three-day training sponsored by the Pan-African conglomerate, for journalists from across the South-West geo-political zone in the country.

Speaking through the Senior General Manager, Branding and Communication, Dangote Industries Limited, Mr. Sunday Esan, Dangote said the role of the journalists is very critical in the society as both the governed and the government rely solely on the media for information to better the society.

Therefore, he said media practitioners could not afford to be less professional and ethical to meet the yearnings of the society pointing out that was the reason for sponsoring the training which aimed at fine tuning the journalists for modern day expectation in view of the evolution of the social media.

Meanwhile a case has been made for the journalists of today to cultivate entrepreneurial spirit and skills in the use of new technology in order to remain relevant in the media and communication.

The Media practitioners were told to always look at the business side of the practice while discharging their duties.

Speaking one after another during the training themed “The Convergence Journalism” organized by Folio Media & Creative Academy, the resource persons stated that though the ethics of the profession of journalism remain sacrosanct, the practitioners must not lose sight of the marketing side of their job.

Dr. Victor Ogwezzy, a Communication and Brand management expert said marketing in the media is everybody’s business without which no media organization would survive.

According to him, media practitioners should be mindful of their own personal survival and that of the organizations in which they are working and take marketing seriously.

He mentioned some newspapers which bothered less about marketing side of the business, but which today are now off newsstand and thus throwing their workers into the unemployment market.

Besides, Dr. Ogwezzy, who is the Chief Responsibility Officer of B2B Matrix Ltd., said journalists also have the responsibility to ensure contents in their newspapers, radio and television are good enough to attract quality readership and audience which will translate to income through advertisement.

He explained that gone were the days were the business of marketing was left purely for the business development executives in the media organizations and that journalists equally has roles to play in marketing. He added that some media organizations’ inability to pay their workers could be partly attributed to non-recognition of seriousness and importance of marketing in the media.

Another speaker, Dr. Jide Johnson, a seasoned media practitioner who is the Director, Special Programmes at the Nigerian Institute of Journalism (NIJ) underscored the importance of the media in the society, saying no one can do without Newspaper, radio, television, phone, data, airtime, which are examples of media.

“Imaging waking up in a day and there was no more radio, television, newspaper or internet, it would look as if the world no longer exist.”

According to Dr. Johnson, journalists should be conscious of the huge responsibility put on their shoulders by the Nigerian Constitution, which is holding government accountable for its actions and serving as the voice of the people.

He said Journalism today thrives much in technology, making a journalist a global Correspondent. He, however, warned journalists against being too emotionally attached to their present employers but learn to develop their own blogs and upload their works there, which they can later develop into books written by them.

Dr. Johnson spoke about the convergence media as a situation where new media platforms have all become major source information so much so that a modern day media practitioner cannot wish away and of the platform.

He explained that media practitioners should see the social media as a tool to be deployed for efficiency and effectiveness as doing otherwise will impact negatively on the journalists’ job.

Concluding the training session was Mr. Lekan Otufodunrin, a former Managing Editor and a Media Career Development Specialist stressed the importance of new media in journalism work and the need for all practitioners to rise to the occasion.

He regretted that some media practitioners still delude themselves by thinking they are gate keepers arguing rhetorically that social media had since dismantled that gate and the access to information had been wide open.

“Without using social media functionally, some of us will soon be irrelevant in the media profession. With social media, some of us can be bigger brands than the companies we work for. There is more to social media than social, its a professional tool for the new age journalist”, he declared.

Mr. Otufodunrin explained told the participants that using social media is not an option for modern day journalists or media professional, as it can make or mar the progress they can make in the profession noting that publishing online without using social media will not give you maximum reach for your content.

“There is more to social media than sharing your content, you need to engage with content of others. Social media platforms are now one of the major sources of information we need as journalists. Replacing press statements; It is complimentary; It is liberating; It makes us a global brand and It enhances our reach.”