Ogun state police command seems to have woken up from its slumber as it’s men killed another suspected kidnapper and arrested one other barely 24 hours after two were gunned down. 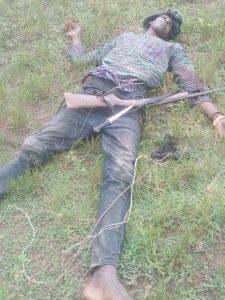 The Police like they did 24 hours ago, stormed another forest and at Ilala forest in Imala area of Abeokuta-North local government area of Ogun state.

The Police Public Relations Officer in the state , DSP, Abimbola Oyeyemi disclosed this in a statement on Tuesday.

Oyeyemi added that the policemen at Imala divisional police station got a tip off of the presence of some hoodlums in the area stormed the forest .

Oyeyemi said there was a gun exchange between the police and the kidnappers.

He said the Police were supported by
the hunters, vigilates , So-Safe corps as well as Fulani youths to storm the forest.

Oyeyemi said in the process of gun duel , one of the hoodlums was gunned down, while another one who identified himself as Usman Maidama was arrested.

He added that other members of the gang escaped into the bush with gun shot injuries.

Recovered from them are: one single barrel gun, one face mask and two pairs of sandal.

The PPRO said “barely 24 hours after two members of a kidnap syndicate were gunned down in Itori area of Ewekoro local government, men of Ogun state police command in another bloody encounter have arrested one member of a kidnap syndicate while one was gunned down at Ilala forest in Imala area of Abeokuta North local government area of Ogun state.

“The gun battle between the police and the kidnappers was as a result of information received by the police at Imala divisional headquarters that six armed kidnappers were sighted in the forest.

“Upon the information, the Dpo Imala ddivision, CSP Bernard Ediagbonya quickly mobilized his men, the hunters, vigilante men, so safe corps as well as Fulani youths and stormed the forest.

“On getting to the scene, the hoodlums, who sighted the team from afar opened fire on them, and the team engaged them in gun duel. In the process, one of the hoodlums was gunned down, while another one who identified himself as Usman Maidama was arrested.

“Other members of the gang escaped into the bush with gunshot injuries.
Recovered from them are: one single barrel gun, one face mask and two pairs of sandal.

“The command’s onslaught operations against bandits have been yeilding positive results, four Ak 47 riffles have been recovered from the hoodlums within the last three weeks, while some of the bandits have met their waterloo during exchange of fire within the same period.

“Meanwhile, the Commissioner of police CP Edward Awolowo Ajogun, who expressed satisfaction with the consistent fight against criminals by men of the command has ordered the transfer of the case to anti kidnapping unit of the state Criminal Investigation and Intelligence Department for discreet investigation, while assuring the good people of the state that the clamp down on hoodlums in every part of the state will be a continuous exercise.

“He also directed that the escaped members of the gang be hunted for, and brought to justice as soon as possible”
.