Emotion ran high in the popular Lafenwa market in Abeokuta on Tuesday evenning as scores of people including infants and their mothers got trapped in the traffic logjam for hours . PLATFORM TIMES observred  that what many residents described  as avoidable  traffic commenced four days ago  where vehicles would  be standstill for hours due to bad portions on the road .

Lafenwa-Rounder road had been known for its traffic logjam especially on market days and festival times  . But, the recent ones seem to have been unprecedented .

PLATFORM TIMES gathered further that aged people as well as  vulnerable were trapped in the long hours traffic snarl .

PLATFORM TIMES gathered that the whole place became impassable as a result of reckless driving of vehicles . 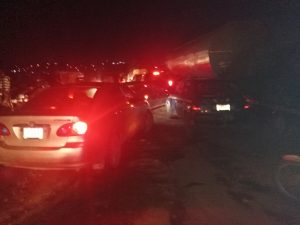 It was further gathered that the fail portions on the Lafenwa-Rounder road were part of the causes of the traffic logjam which rendered all the vehicles standstill for hours . 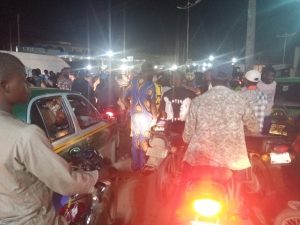 The Traffic Compliance and Enforcement Corps and the police traffic wardens abandoned the complicated logjam and went home in the evenning .

PLATFORM TIMES who was at the scene monitored the situation and discovered that some nursing mothers withy jeir infants were observed to have been caught in the serious mess that led to stand still of vehicles for hours . Apparently reacting to the heat and fatique , the infants were heard crying which was met.with their mothers .

Upon finding out , it was gathered that their mothers had been in the vehicles which got trapped in the thick traffic for hours . Speaking with our corresponding, the affected motorists and commuters called the governor of the state ,Dapo Abiodun some unprintable name .

Some affected residents who could not control their emotion rained curses . 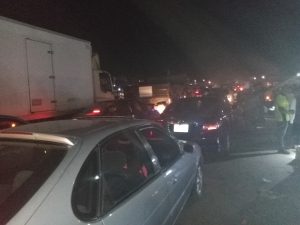 An aged man who spoke with our Correspondent lamented that he regretted ever plied the road .

Finding showed that the source of the traffic was the gully created around the railway along rounder .

Further findings also showed that the problem was caused by the failed portions after the railway which slowed down some vehicles .

The informed men who tried to control the traffic were frustrated following the seriousness of the situation .

The Motorcyclists however took advantage of the situation as they charged exorbitant prices fr a shirt distance .

Some residents of the state however begged the governor to maintain the size of the road as designed by his predcessor .

Some also urged the governor to allow palliative measures while rains subside .