The internal wrangling rocking the ruling All Progressives Congress in Ogun state gets messier as the two factions loyal to the state governor , Prince Dapo Abiodun and his predecessor , Senator Ibikunle Amosun Inaugurate parallel exco in 236 wards . 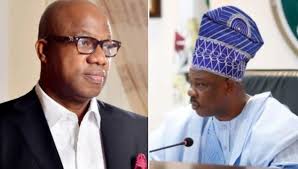 Both factions are also planned to hold parallel local government Congresses on Saturday .

Announcing his plan to inaugurate his ward exco on Friday , Amosun’s faction urged his loyalists to assemble at the Senatorial District office for the inauguration.

The statement read “the recently elected ward executive members of the Ogun state All Progressives Party will be inaugurated tomorrow, Friday 3rd September,2021, at Senator Amosun’s senatorial office at Abiola way, Leme area of Abeokuta by 9am.

PLATFORM TIMES had reported that the appeal committee set up by the national leadership had submitted it’s report on the findings during the meeting with all the stakeholders in the party in the state.

It was reliably gathered that the committee had recommended that the party should share the offices between the two major camps in the party in the state .

The recommendation, according to sources was rhat, the national leadership should placate Amosun group with some positions . It was said that 50/50 sharing formula was muted.

Another sources said the observation of the committee was that Abiodun faction’s failure to buy the nomination forms for ward congress in line with the party constitution might work against the party if the leadership hands over the structure to Abiodun .

PLATFORM TIMES however gathered that Abiodun faction seems to have been recognized by the Chairman, Caretaker Committee of the Extra Oedinary Convention , Mai Mala Buni.

It was gathered that the rumoured recognition might not be unconnected with the Governor espirit de Corp. Buni is Yobe Governor and Abiodun is Ogun State governor .

A source hinted PLATFORM TIMES that Abiodun has begun working on the local government excos to be put in place on Saturday.

The source further said “But I suspect Amosun too might inaugurate a parallel too .