Ogun has changed for good in the last two years, Adeola claims

A senator representing Lagos West Senatorial District, Senator Olamilekan Adeola claimed that Ogun state had never had it so good before the emergence of the state governor , Dapo Abiodun . he 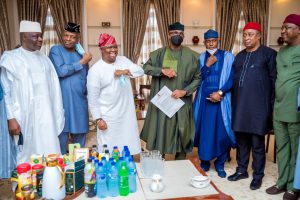 Adeola said Governor Abiodun, through sound managerial policies, has transformed the socio-economic landscape of the state. 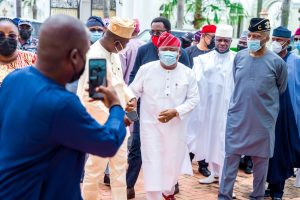 He noted “what you are doing in this state today is unbelievable and every close watcher of what is happening in the state knows that Ogun is no longer what we used to have in the past”. 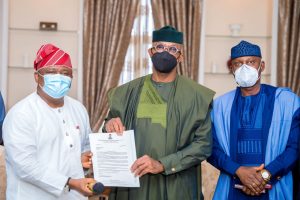 Adeola led some Senators drawn from five geopolitical zones in the country have condoled with the Ogun state governor, Dapo Abiodun over the demise of his father Emmanuel Abiodun .

The Senators lauded the governor over the rapid development the state has witnessed since the advent of his administration two years ago.

The senators, who attributed the development in Ogun to sound policies and programmes put in place by the Abiodun-led government, gave this commendation on Sunday when they paid the governor a condolence visit at his hometown in Iperu-Remo.

Adeola said that Governor Abiodun, through sound managerial policies, has transformed the socio-economic landscape of the state, noting “what you are doing in this state today is unbelievable and every close watcher of what is happening in the state knows that Ogun is no longer what we used to have in the past”.

“I will continue to say that for anything, we know that Baba must have given you a very good home training for you to have steered the ship of Ogun State in this direction”, he added.

Paying tribute to the late father of the governor, Pa Abiodun, Adeola maintained that the octogenarian was an epitome of good who related well with his family members and his community, urging his family to take solace in the fact that the deceased lived a good life and has gone to rest with his Creator.

The senator assured Governor Abiodun the support of members of the senate, saying “we that are your followers are leaning from you everyday. Sometimes, we see things that we get annoyed with, but when we say anything, the governor will tell us to calm down, let it be. And that calmness, we know you have taken it from Baba.

“It is so evident and that is what has taken Ogun State to this enviable height everybody is seeing and saying what is happening in the state”.

Responding, Governor Abiodun said there is no right time to lose a beloved one, adding that his father taught him right values and encouraged him throughout his political career.

He stated further that his father taught from primary to tertiary level of education, appreciating the senators for the show of love and support at this trying time.

“There have been outpouring of love and affection from people all over the country. Nothing can be more soothing then the show of love from my brothers and senator friends who have come from far and wide to condole and commiserate with the Abiodun family. Indeed, we are very grateful.”