Pensioners in Ogun state unleashed abundant anger on the prominent people in the state including the Secretary to the State Government (SSG), Tokunbo Talabi and other civil servants leaving them stranded as they shutdown the State secretariat. 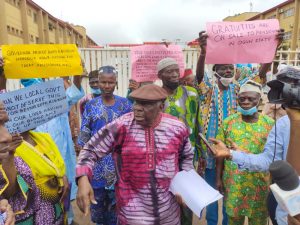 The pensioners, under the auspices of Local Government Pensioners Association (LOGPAN) took over the entrance of the Secretariat that houses the governor’s office while protesting non payment of N68 billion 10 years outstanding gratuity. 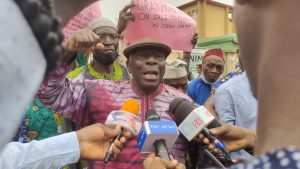 PLATFORM TIMES gathered that the pensioners became more enraged when they got the hint that the governor of the state , Dapo Abiodun had travelled out of the country while they were suffering from his refusal to pay their gratuity.

PLATFORM TIMES reports that the aged men and women blocked the two main gates of the secretariat, in Oke-Mosan, Abeokuta, locking out Talabi and other civil servants for hours. 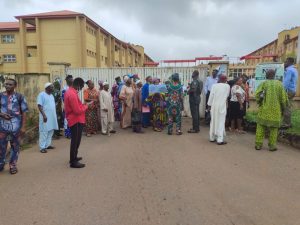 The protesters were armed with placards with inscriptions such as “gratuities are on sales to pensioners”, “Governor Dapo Abiodun honour your father and treat Pensioners well” and “Governor Abiodun Abiodun, we don’t deserve this worst humiliation”, among others.

Members of LOGPAN had in June staged a protest to express their grievances.

Addressing journalists, the State Chairman of LOGPAN, Sikiru Ayilara lamented the alleged inhuman treatments being meted to them by the governor Dapo Abiodun’s administration. 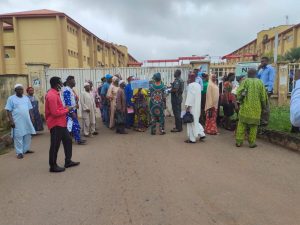 He accused Abiodun of failing to keep his promises to the pensioners, lamenting that, some of them still earn paltry sum of N3,000 as monthly pension.

Ayilara described the quarterly payment of N500 million by the governor which according to him would take 34 years to clear all the gratuities as “a wicked act” which is unacceptable.

He called for the review of the policy by voting N1billion monthly instead of payment of N500m quarterly which they said would take 34 years to clear the outstanding.

He listed some of their demands to include, non-payment of gratuities, lateness of pension payment, non-increment in the monthly pensions and discrimination against the members of the association by the government among others.

Ayilara insisted that, it is illegal for the state government to be paying their pension through the Ministry of Finance instead of the Bureau of Local government pensions.

“We had informed all the four paramount rulers in the state with no result. We had held six meetings with the SSG, Chief of Staff, Head of Service, Commissioner for LG and Chieftaincy Affairs, among other notable government officials.

“Governor Abiodun should honour us; grandfathers and grandmothers and direct his personal attention to us for us to meet and find lasting solution to the inhuman treatments being meted to us at our old age, leading to untimely death death among us after serving the state for between 10 and 35 years.

“We demand immediate harmonisation of the pensions. We demand regular payment of our pensions as it was.”