Halima Oniru, the ex-wife of one Ogun traditional ruler, Adetokunbo Tejuosho has petitioned the Inspector General of Police for allegedly obtaining money from her under false pretence, forgery, among others.

Tejuosho was among the 75 coronet Obas installed by the immediate past governor, Ibikunle Amosun, but were reportedly demoted to Baales by the Dapo Abiodun-led government.

Oniru in a petition dated March 2021 written by her counsel, J. S Agada & Co. and made available to newsmen in Abeokuta accused the embattled traditional ruler of fraudulently coming up with many business plans with an intention to swindle her company, Haleems Integrated Services Limited.

In the petition, Oniru alleged that Tejuosho borrowed money running into one hundred and fifty million naira from her on a pretence of pursuing a chieftaincy title in Ogun state.

The ex-wife of the traditional ruler who presented receipts of some of the transactions also accused Tejuosho of forging receipts so as to defraud her of a huge sum of money. 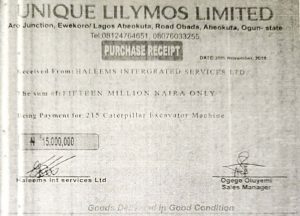 In the petition, she further alleged that the embattled monarch is fond of beating her on any slight opportunity.

Part of the petitions reads, “In the guise of doing certain kind of business, the suspect continued to place incessant/continuous demand for monies of our client business running into hundreds of millions. Some of such traceable and notable receipt of the said transaction are equally annexed to this Petition for your ease of reference.

“Our client and the suspect finally came together and were co-habiting as husband and wife. In the course of their being together, our client got to know about these other sides of the suspect’s fraudulent and numerous nefarious activities.

“As a result our client confronted him on same and as a result, the suspect started beating and attempted killing our client at any slighted opportunity and he finally pushed our client out of the house without allowing her to carry any of her belongings from the house. Pictures of the various degree of injuries inflicted on our client by the suspect in the course of beating her and attempting to kill her are hereby annexed to this petition for your perusal. 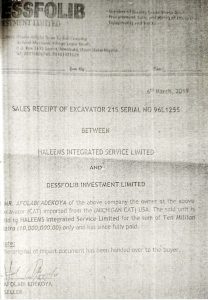 Oniru while speaking to newsmen on Sunday further accused the embattled monarch of blackmailing her with a threat to expose her nude pictures on social media.

She said Tejuosho had engaged a blogger, Gossip girl Niaja, to malign her image and her children on social media.

In his reaction, the embattled monarch said all the allegations against him was false and unfounded.

Tejuosho insisted that his ex-wife was only looking for way to allegedly pull him down.

He added, “On the N150million, we have been dragging this for 2years now. that I told her, you said I’m owing you N150million, where did you get the money, prove to me where she got the N150million from. let me be frank with you, there has been money issue between me and Halimat. I said Halimat, let us sit down, let us calculate what you have taken, how much is left, how much I’m going to refund you. She has been running away from that, all she’s saying is that I’m owing her N150milion.”