“So many times, we have heard that the government is offering free medical treatment but none of those opportunities have ever come to us because of our bad roads”, Issac Emmanuel, a resident in Afowowa Gbelu, Ewekoro local government in Ogun State said.

Isaac, a middle aged man in his 70’s, expressed readiness to take the COVID vaccine but the deplorable state of Ewekoro road linking the village had denied him access.

He added that this bad road network might have also hindered the community from having a vaccination center.

“The last time we saw them in this village was when they came to campaign before the 2019 governorship election, they promised to provide our demands but nothing was forthcoming from them. Go round the village and you’ll sympathize with us.

“As I speak to you, I don’t think anybody has been vaccinated in this village, we are always here and no health officers have come to tell us something like that”.

Like  Isaac, another residents in Ntoji in Odeda Local government area of the state, Silifat Sobowale who is in her 60’s would love to take the vaccine but the road in her community linking the community to the nearest vaccination center which is about an hour is in a deplorable state.

Other residents in these areas claimed that the bad roads had limited their access to getting vaccinated, despite the government’s promises to ensure the vaccine reaches the grassroot people.

Bad roads in Ewekoro, Odeda Local Government
In Ewekoro local government area it was observed that most of the rural roads are in a deplorable state.

When the reporter plied the road she observed that the roads were not in good condition as it was a wreck of neglect.

“As you can see our roads are bad and it gets worse during the rainy season.” Adebayo, a resident in the community lamented.

Just like the roads in Ewekoro, residents in rural communities in Odeda local government also told this reporter the bad roads deny them access to several opportunities unlike those in the urban areas.

Despite the different claims by residents on how their road has been neglected the State government said it has spent a total of   N7.3bn on road construction in six months.

Akeem Adesina, the Special Adviser to Governor Dapo Abiodun on Works and Infrastructure in company with his counterpart, Gbenga Akintola, the General Manager, Ogun State Public Works Agency had claimed that a total of N7.3bn has been spent on roads construction and rehabilitation between January and June 2021.

The government officials said this despite the complaints of residents that many roads across the state are still deplorable.

“They said they spent billions of naira on roads, but people in the areas find it difficult to see the constructed or rehabilitated roads.”

Ogun State Commissioner for Works and Infrastructure, Ade Akinsanya , announced that every two weeks, no fewer than four road projects would be presented to the State Executive Council for approval.

Also, the Commissioner for rural development in Ogun, Engr. Oludotun Taiwo on December 14th, 2020 while defending the ministry’s 2021 budget proposal before state’s House of Assembly Committee on Finance and Appropriation stated that the State Government had concluded plans to rehabilitate 207 rural roads in 2021.

Taiwo said the rehabilitation of the rural roads will cut across the  20 Local Government Areas of the state.

FEC approves 309b for road construction in Ogun, others
In July 2021, the Federal Executive Council approved the sum of 309 billion for the construction of roads in Ogun, Lagos and three other states.

The contract was approved at a virtual FEC meeting presided over by President Muhammadu Buhari at the Presidential Villa in Abuja.

Minister for Works and Housing, Babatunde Fashola while giving the breakdown said the roads totaling 274.9 kilometers would be built by Dangote Group of companies under the tax credit policy of the Federal Government.

However, in all these allocations findings shows that these communities have not yet benefited as the roads still remain in deplorable state.

Bad road chases vaccine officials from rural areas
A source within the Ogun State Ministry of Health, who claimed anonymity, hinted to this reporter that bad road linking to rural areas was one of the reasons why the vaccine officials could not reach rural communities.

The source told this reporter that the vaccine officials were also discouraged from going to the rural areas because of their negative response to COVID-19.

‘’At first, they did not believe that COVID-19 existed. We used to blame ourselves if we go there for any medical reasons. Yes, that bad road is another factor that chases us from going to them’’.

When contacted, the State Commissioner for Health, Dr. Tomi Coker neither responded nor returned calls and messages sent to her phone.

COVID-19 vaccine and how Ogun State secured it
When the COVID-19 outbreak started in Nigeria, the first index case was reported on February 28th in Lagos.

The index case according to the Lagos state Commissioner for Health, Prof Akin Abayomi was a consultant with Larfarge Cement Company, located in Ewekoro local government area of Ogun State who came into Nigeria on the 25th of February from Milan, Italy for a brief business visit.

Meanwhile, the Director of Nigeria’s National Primary Health Care Development Agency (NPHCDA), Dr. Faisal Shuaib had earlier in March said that the Nigerian government is hoping to secure 70 million doses of vaccines with target to vaccinate 100% of the eligible population.

Since the first case, more cases of COVID-19 have been reported across the 36 states in Nigeria with a total of 2,702 deaths recorded as at September 30.

Nigeria, on March 2nd, received 4million doses of the AstraZeneca/Oxford vaccine shipped via the COVAX Facility, a partnership between CEPI, Gavi, UNICEF and WHO.

Ogun State having met the requirements for delivery, March 8th became the first state to take delivery of the COVID-19 vaccine.

The State Government received 50,000 doses out of the expected 100,000 doses of AstraZeneca/ Oxford Covid-19 vaccine donated to the state by the federal government.

Grassroots people reject COVID-19 vaccination, others  claim ignorant
It was another development when residents of Afowowa Eleyele told this reporter that they were not interested in the AstraZeneca/ Oxford Covid-19 vaccine.

When asked for reasons, a resident who described himself as Oba boys , said “They told us to come to the local government secretariat before we can get the vaccine. That place is too far, many of us here are used to trekking. If we were to trek , it would take us about one hour before we could get there.

“Most of us are not even interested in the vaccine, if they would like to give us, they should come to us.”

Ismail Aina , an aged man in his late seventies in Ntoji village within Odeda Local Government told this reporter that he has never heard of COVID-19 vaccine before.

‘’I do not know what you are talking about. I just used to hear about COVID-19, I do not know about the vaccine. Nobody came to us, they might come tomorrow but as at this moment, I have not seen any health officials in this village’’.

Another resident in Ntoji identified as Segun Onifade queried this reporter “look at this road, how would they give us such vaccine injections here? .

Also, Kubrat Sunday an elderly woman in her 80’s said, “No vaccine here at all and our road is deplorable as you can see Government should continue to intensify efforts on this.They should embark on awareness campaign” She said

Mrs Sibedatu Adeboye an 85-year old woman in the community who is one of those on the priority group that ought to have gotten at least a first dose of the vaccine said “As for COVID-19 vaccine or anything we did not see anything in this place we the elderly are yet to receive. The government did not do anything for us here as our hospital has been abandoned.”

Vaccine Cold chain difficult to maintain in rural areas- Expert
Speaking, A professor of Medical Laboratory Science, Professor AbdulWasi Hassan disclosed that it will be difficult for the health workers to maintain a cold chain for the distribution of COVID-19 vaccines in rural areas.

Prof. Hassan noted that keeping the temperature of the vaccine in check from the point of production to where it is being distributed will make it difficult to get to the rural areas.

“There’s a particular temperature that the vaccine must maintain from production to the point of administration. There should be no break in the cold chain. That is another point of loss of money for the government.” He said

When asked what implications of not getting the vaccine across to those in rural communities, Hassan said herd immunity would not be achieved on time. 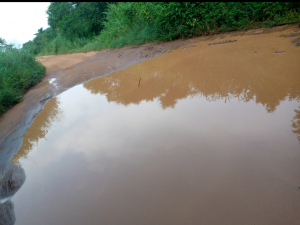 “Those people there certainly will not have access to the vaccine and so the protection we’re trying to establish which is the herd immunity will not be achieved, especially on time.

The researcher lamented the issue of insecurity in rural areas, saying insecurity might also chase vaccine officials from rural areas.

He noted that health  workers run away from rural communities due to insecurity, herdsmen attacks, bandits, kidnapping as well as the bad roads during raining season, this he said limits access of the vaccine to rural areas.

Prof. Hassan called on the government not to relent in its efforts towards getting vaccines to those who are mostly in need of it.

He also urged the state government to create more awareness and sensitization on COVID-19 vaccine in the rural communities.

‘Top govt aides shift responsibilities’
Efforts made by this reporter to get reactions from the state government showed that government officials , including the governor’s spokesperson were shifting responsibilities to each other.

After several calls and text messages by this reporter to Remmy Hassan, the Special Adviser to Governor Dapo Abiodun on Public Communications, He directed this reporter to the state Commissioner for Health.

Meanwhile , the State Commissioner for Rural Development, Engr. Oludotun Taiwo did not respond to calls.

“This OUTBREAK story was supported by Code for Africa’s WanaData program as part of the Data4COVID19 Africa Challenge hosted by l’Agence française de développement (AFD), Expertise France, and The GovLab”