Former president ,Olusegun Obasanjo lost his temper on Saturday against some supporters of the Ogun state Governor ,Dapo Abiodun for taking 2023 campaign to the Owu festival ground .

The supporters who assembled themselves at the Odun Omo Olowu 2021 held in Abeokuta where Obasanjo, the prime Minister and Balogun of Owu kingdom represented the Olowu ,Oba Adegboyega Dosunmu . 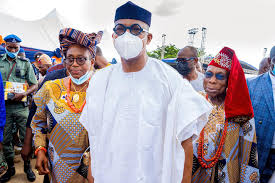 The occasion which had  former governor Ibikunle Amosun as the chairman of the occasion  with the presence of some dignataries including the governor himself ,the Alake of Egbaland Oba Michael Gbadebo and the Agura of Gbagura ,Oba Saburi Bakre among other prominent personalities was almost marred by poliitical campaigns . 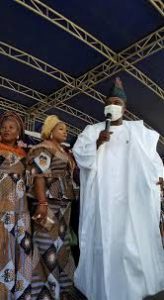 PLATFORM TIMES gathered that Abiodun’s supporters reportedly threw  caution into the wind following the overwhelming gesture of Amosun shortly after he arrived .

PLATFORM TIMES further gathered that Amosun shortly after he arrived on foot into the venue, decided to go round the tents and took homage from the people who displayed the usual love to him .

The governor had not arrived during the time Amosun’s  show of strength and popularity .

This ,it was gathered irked the governor’s supporters who are also sons and daughters of Owu and assembled themselves to retaliate .

The festival was going on peacefully and rejoicingly and when the governor arrived, he changed his tactics as he also went round the tents and received his accolades from the people .

They had done it about two three times without being cautioned as the Masters of the ceremony ; Femi Omilani, Adelani Akanji popularly called Oba Pedepede and Tolu Onafowokan looked the othersides due to the sensitivity of the situation .

But, they over stepped their boundary as they decided to interject Obasanjo while he was observing the Ela Isu (Yam ritual) and the retired general washed them down in the presence of their leader .

Obasanjo said ” We are not here for campaign .If you don’t maintain decorum I will walk you out of here . Do you love the governor more than we do ?

“I will tongue lash you people . If you don’t stop this nonsense I will send you away from here .”

PLATFORM TIMES however observed that the governor’s supporters maintained decorum instantly and the festival ended well with the Fuji legend  Abass Akande threw sweet drum beats to the people’s waist shortly after the official programme ended .