A drainage where residents turned to dump site

“This is where we defecate and bath anytime. What is there to be afraid of. Disease should have killed us if what you’re saying is true because we have been using here for a very long time.

“You don’t know anything, people used to come here to wash cars and motorcycles. Sometimes, my friends and I used to wash clothes here. I can tell you that I’m healthier than you” said Rasheed Adetona who speaks with this reporter with his local dialect.

This reporter accosted Adetona after he defecated inside a river popularly called Dandaru around Mokola area. This river runs through Ogunpa, Oke-Ado, Molete and Dugbe area of Ibadan.

Like Adetona , many were also sighted defecating into the river, some were bathing, while others were washing motorcycles at the river bank.

Investigation by PLATFORMTIMES showed that, many communities in Ibadan, Oyo State Capital were guilty of open defecation and disposal of waste to public places.

Meanwhile, this development is against the Environmental laws of Oyo State. The environmental law clearly stated that, open defecation and disposing of waste openly is an offence.

There is a pedestrian bridge at the Bola-Ige international market, popularly known as new Gbagi market.

The pedestrian bridge is currently threatened by residents of the area and marketers who allegedly dump refuse on the bridge.

Odour of human feces, urine and refuse disposed on the bridge are capable of transmitting deadly diseases to the whole area if nothing is done to curb this habit.

In a discussion with one of the residents in the area who identified herself as Mrs Johnson, alleged that the feces were disposed on the bridge by people who do not have toilets in their homes.

“This bridge has been here for many years. What I know is that those people who defecate on the bridge doesn’t have toilet in their houses. There are many houses without toilet in this area.

“The refuse you’re talking about, I think that fault comes from the government agency in charge of packing dirt, they won’t come at the time we needed them” said, Mrs Johnson.

Molade refuse site goes higher to the level of a bungalow

A refuse site is situated within Molade area in the Egbeda Local Government of Oyo State.

Over fifty houses including, schools, mosques, churches and bars surrounded this refuse site.

When our reporter visited the refuse site, human feces and other waste were disposed openly, causing the environment to smell profusely.

Every attempts to speak with leaders of the community proved abortive and residents of the area were afraid of speaking with this reporter.

However, a source within the community who does not want his name of paper told this reporter that, they have violated environmental laws.

The route from Orita-Aperin to Bere is the road that leads to Modina, Elekuro in the Ibadan South-East local government of Oyo State.

Orita-Aperin, Bere, Modina, Elekuro are local settlements which most of its inhabitants are commonly referred to as ‘hoodlums’.

Observation by PLATFORMTIMES showed that, from Beere , Agbeni , Ogunpa , Oke-Ado to Molete needed urgent attention from the state government in other to save the areas from the outbreak of cholera , bacteria and other water and airborne diseases.

Defecating and urinating openly, disposing refuse into drainages, houses diverting water from bathroom to major road, non-availability of dump site, many houses without toilet. All these are factors that could lead the areas into outbreak of cholera.

When this reporter visited the areas, defecations were sighted almost at every corner. Before you walk for a minute, you’ll surely sight shapes of different urine and refuse on the floor.

A source within these areas, advised this reporter not to interview anybody in the area in other to abstain from being beaten.

The source hinted that, most of the apartment in the area do not have neither a toilet nor waste bin.

“Don’t talk to anybody because you don’t know who is who. Those guys are very dangerous. Just be careful and do your findings very well.

“Many houses are here without toilet. They defecate anywhere they see. They dispose waste anywhere even on the road.

“There is a refuse dump in Modina , go there you’ll see what I’m telling you. That place is even worst. They defecate there like normal toilet”. The source said. It was a cold morning on Tuesday, this reporter took off from Academy area of Ibadan to Iwo road.

He continued his journey from Molete to Dugbe, Roundabout and ended at Mokola area

Dumping refuse on the road is one common behavior residents of these areas possessed. They dumped refuse packed in sacks, nylons and bags at the culvert area of the roads.

“Diarrhoea diseases constituted one of the leading cause of death on children under 5 years of age. Women are also at increased risk of sexual violence because they are forced to expose themselves undesirable”, said, a Chief Consultant in the department of Family Medicine, LAUTECH Teaching Hospital Osogbo.

Dr. Akeem Ogundapo told PLATFORMTIMES that, diarrhoea were common diseases that could be easily transmitted through contaminated water.

He explained that, typhoid fever, polio and worm infestations could also be transmitted from open defecation.

Also, an environmentalist, Adekunle Ibagbe said “feces contains bacteria and virus. If such feces are left in open space, carriers like flies can infect other people with diseases”.

Meanwhile, when this reporter seeked for reaction from the state government, Taiwo Adisa, the Chief Press Secretary to Governor Seyi Makinde said he would direct this reporter to SSA on SDGs. 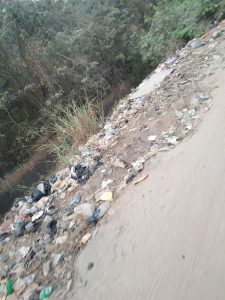 But, unfortunately every attempt to reach the governor’s aide prove abortive as his number was not reachable.