Ogun Residents protest installation of new Oba,says he is alien in Imasayi

Residents of Imasayi, a community in the Yewa North  local government area of Ogun State have protested the installation of the new Oba  of the community. 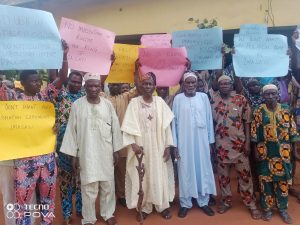 This is coming after Oba Kuoye Olalekan Adeleke was presented with the staff of office and instrument of appointment of the community by the State government three months ago with the coronation ceremony coming up this Saturday. 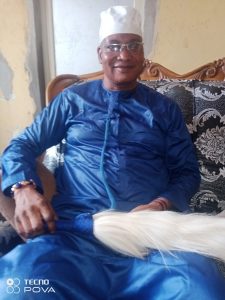 But the residents armed with various placards, while protesting the installation said the Oba  is not from the town not to talk of being from any of the ruling houses.

They demanded that his installation be reversed.

The placards had inscriptions like “Please, help us in Imasayi, “Our rights are being infringed, No to Kuoye as Olu  Imasayi”, “We don’t want political king in Imasayi, “kangaroo election process was done at Ayetoro, follow the process”.

The Balogun of the town, Chief Timothy Rotimi Akinleye who spoke on behalf of the protesters said that the installation of the new Oba is against the norms, customs and traditions of the land.

According to him the current king is not from the land and also not from the two ruling houses of the community.

Akinleye claimed that the embattled Oba was only installed as a chief by the late monarch because they were friends, declaring that he is not entitled to the throne at all.

According to the community Chief warrior, there are two ruling families in the land, which are  the Aribioyo family and the Oyesoku family .The  former produced the late Oba  and it is now the turn of the Oyesoku family.

According to him there is no family called Kuoye family in Oyesoku ruling house .

He also claimed that the current king was chosen by an uncertified chief of the land.

The Balogun explained that in the land, there are five kingmakers in the land in which three were dead but out of the two remaining, only one of them had certificate which is the “Asaba” and the other one “Odofin”, the uncertified one which was the one allowed to vote twice during the selection process.

His words “What is actually happening is that we have a process, aged long process, traditions, customs and norms before we appoint anybody as the Oba but, these processes are being eroded and all of a sudden we heard that the government appointed somebody who is a stranger element,he has no family, no house here, nothing whatsoever here

“The Christ Church formerly Iju Imasayi United school was established in the year 1923, there was no name bearing Kuoye whatsoever, he doesn’t belong to this Community whatsoever, he was made the Aare of Imasayi by the late Oba because they were friends from Ado Odo Ota. At  the demise of the Oba, he (the Oba) surfaced after 14 years of being installed as Aare.

“Before then he had never visited Imasayi. He  performed those rights that do not belong to him, we have the Asipa here, he never told us that he was eyeing the post of Olu of Imasayi
These things contravene  our traditions,a lot of people have lost their lives, for example,  on the day he was to receive his letter of appointment, two chiefs died there, on that particular day he was supposed to take the letter they were buried.

“At present we have two ruling houses, Aribiyo ruling house, they produced the Oba that was late , it is the  turn of the Oyesoku ruling house and they have not presented any candidate to the Regency Commitee, how he became the Olu Imasayi is mysterious and unknown to the norms, customs and traditions of Imasayi, this is why people are dying like fowls.

“We have kingmakers, three of them have died, it remains only two, it was during this process that we understand that one has a certificate bearing that he is the Asaba, the other one because of his characters known with him, the people who presented him said there was  nobody to present, the late Oba refused to give him certificate,  he said that he would be watching him for at least 15 years before he can give him the certificate, he has no certificate at the present moment and he is telling everyone that he is the Odofin of Imasayi.

“Government has presented letter to Kuoye, we have written so many letters to the Government but we are no  bigwigs to assist us, letters were written to the Governor’s office, letters were written to the Commissioner for local government and Chieftaincy Affairs, we even went ahead to the Governor’s office to protest two times, we met the Deputy Governor and our representative at the House of Assembly Hon Awoso from Igbogila, he was the one who prevented  our youths who went with us from being arrested because they informed Eleweran that we have come there to riot, he told them that these constituents came to him to air their  view about what is happening in Imasayi that is not palatable and they left us but since them they have been using thugs and police sponsored by Aare to beat our boys and lock them up”.

In his reaction, the embattled king, Oba Kuoye Olalekan Adeleke said that not only he is  a son of the land but a member of the Oyesoku ruling house

According to him there are eleven families that make up the Oyesoku ruling family, his own family the Kuoye family he is one of the families and he is a son of that family and so he is entitled to the throne.

He claimed that all his documents from primary school till now had been carrying the surname and that he could prove it.

The king however called every son and daughter  of the land to embrace unity and that if truly they were interested in the development of the Community then there is a need for all of them to come together to fight for their interest.

He said” I am a son of this land, my family belongs to one the branches of Oyesoku ruling house, there are eleven family in the Oyesoku ruling house which Kuoye family is one, on the list, Kuoye is number two and we can find it in the history book titled, the appendages of the Oyesoku family written by late Oba Olude around 1989 or thereabout.

“Kuoye is my surname and I have been using it since birth, it is in all my documents since primary school

“Kuoye is direct descendant of Oyesoku ruling family, whoever that said Kuoye is not an indigene should retrace history.

“My message is like I read during my presentation of staff of office, I said I have opened the window of reconciliation with everybody, if truely we are interested in the development of Imasayi, bringing it from the shackles of Oppression all we need to do is Oba has emerged, let us come together to build the Imasayi of our dream”.

OBADA KIDNAPPING : We have paid the ransom with Codeine, says Ogun resident