As it was widely reported that a petrol tanker caught fire in popular Lafenwa market in Abeokuta area of Ogun state, new findings by PLATFORM TIMES have revealed that hoodlums in the area played “important role” in the fire outbreak.

Findings by PLATFORM TIMES revealed that the shop belonging to the Babaloja of Lafenwa Market, Alhaji Musa was set on fire by hoodlums who were reportedly not happy with him.

Multiple sources who spoke with PLATFORM TIMES on Monday insisted that the shop of Babaloja was set on fire to avenge the alleged ill-treatment given to them by the market leader.

It was however gathered that the effect of the fire led to the outbreak which destroyed many shops in the market.

When our reporter got to the burnt shop, it was discovered that the Babaloja’s shop was about 500 meters away from the Ojurin where the petrol tanker fell. 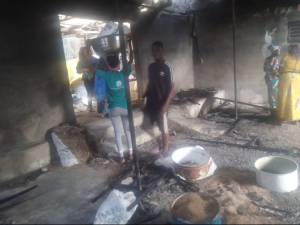 It was further observed that the shop which was a rice mill was burnt to ashes as remains of burnt ofada rice could be sighted littering the area.

PLATFORM TIMES further discovered that another part of the shop was destroyed and many of the goods were reportedly carted away by the hoodlums. 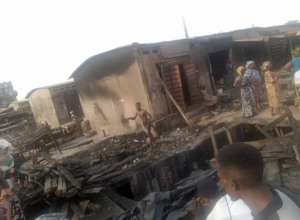 Also, some of the market traders accused the hoodlums of destroying their shops and carting away their goods.

One of the traders, Adeolu insisted the hoodlums were on a reprisal attack on the Babaloja who was reportedly on loggerhead with them. 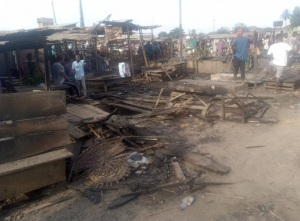 Adeolu said, “they destroyed my shop, the Babaloja’s shop and others. This was not the result of fire outbreak, but a deliberate attempt by the hoodlums to deal with Babaloja.

“These hoodlums also stole some of our goods. They have become something else inside this market. It is really a devastating thing.”

Another trader whose shop was affected insisted, “this is not a result of the scooping like they made people believe, the Lafenwa hoodlums purposely set Babaloja’s shop on fire because he is on loggerhead with them.

“They even stole our goods, those guys are robbers and it is time the government comes to our aid and do something about this.”

Meanwhile, PLATFORM TIMES observed that the traders are gathering in large numbers and reportedly planning to take a protest to the governor’s office.

The traders lamented that they are tired of the” unbearable” attitude of the hoodlums who were allegedly disturbing the peace of the market. 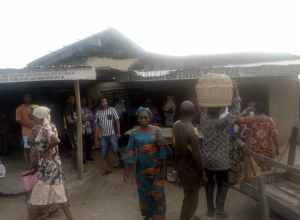