“If you are not a traveller, you won’t be allowed inside the terminal,” the check-in officer said flatly.

At first, this reporter was convinced that he might not find his way inside the terminal but to his surprise, he breached almost all security checkpoints. Not only that he enter but also navigated freely through departure and arrival sections of the international airport.

This reporter arrived at the Murtala Muhammed International Airport, Lagos at 3p.m. on Monday, November 22, 2021, on the pretence of picking his uncle who returned from the United Kingdom. The reporter’s arrival at the airport was just a few hours to the arrival of a London-Bound British Airways flight.

“Why are you just standing here since morning, what did you want ? How can I help you? female police officer enquired in a soft voice.  The officer had her name , Bunmi Ayinla inscribed just atop her right breast pocket.

“I am waiting for my uncle who is coming from the UK “the reporter responded.

“Then you should wait over there, said the police officer as she pointed to a story building covered with a Techno Phantom advertisement. The building has a car park underneath.

“That place is too far, I have been standing in the sun since morning” the reporter spoke angrily.

“Oga , do you have money? It is only money that can solve the problem” she said again

How much are we talking about? The reporter asked.

“I will take you inside but you will pay N5,000, You will see your uncle as he alights from the plane.

“Are you serious? The reporter enquired.

“Very well, but you will have to give me your phones, you know that is our policy” the police officer responded again.

Although, this reporter knew it was a lie told for extortion but he played along and surrendered his phone to the police officer at the entrance of the terminal.

Inside airport corruption
The Nigerian Government has implemented policies that would make the country investor-friendly and encourage tourism.

Some of the places targeted by these initiatives are the airport, where hawking and asking for tips have been discouraged.

But despite these efforts, airport officials and attendants still devise ways to extort passengers.

Nigerians are considered some of the most widely travelled people around the world. In 2016, the National Association of Nigerian Travel Agencies disclosed that as much as $2.3 billion was generated by Nigerian travel agents in 2014 from ticket sales for foreign airlines and tour services.

As the airlines rake in huge revenues, their local travel agents have also created and fed on an illegal segment that thrives on extortion of travellers.

The two most affected airports are the nation’s most active international airports, Abuja and Lagos.

At the Lagos airport, officer Bunmi signalled other police officers who manned the terminal entrance and they spoke briefly in whispers.

“You can go, take good care of yourself,” one of the officers told this reporter amid laughter.

As we climbed a row of steps at the departure terminal, we headed towards the arrival.

Scores of travellers were trooping in with their pieces of luggage, I watched as we make our way to the arrival section.

“This is where you will stay, as soon as he dropped from the aeroplane, you will see him immediately, I have dropped your phone with the officer that stays at the entrance of the terminal, once you’re going make sure you collect it from him” she spoke like when a boss commands the subordinate.

In 2017, a report by the National Bureau of Statistics said an overwhelming percentage of Nigerians will accept a bribe when offered or pay a bribe when demanded.

The NBS, in its Nigerian Corruption Survey 2017 report, said that Nigerians mainly pay bribes to either speed up the procedure, receive preferential treatments or avoid the cancellation of public utilities.

Extortion gate
The reporter watched security officers stationed at the entrance of the terminal of Murtala Muhammad International Airport, Lagos as they go about their usual extortion businesses. 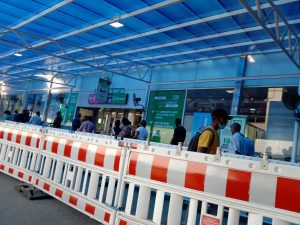 The terminal has about three entrances, each with at least two police officers and other security officers. The way the officers stuffed money into their pocket was amazing as you hardly see the currency let alone, the amount collected.

For about 20 minutes before the arrival of officer Bunmi, the reporter witnessed a series of cases where travellers would have to tip the officers before their relative would be allowed to follow them to the check-in counter.

A middle-aged man sat on the floor opposite the terminal, his appearance showed he might have escorted probably one of his relatives to the airport.

As this reporter tried to move close to the man, a faint voice emerged, “Daddy,” A young lady kitted in sportswear waved at the man.

Quickly, the man rushed to her daughter who was at the entrance, he dug his hand into his pocket and hand over money to the officers. I watched the scene helplessly, but I could not ascertain the amount he gave the officers. 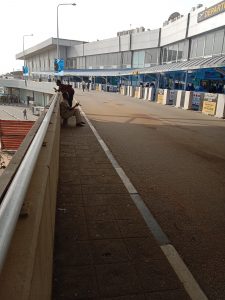 Another traveller had requested that her associate be allowed to follow her into the terminal, but the officers declined. After several pleas, the traveller offered the security officers some money and her associate was allowed in. The videotape of the scene showed how they bargained.

A Nigerian based in the United Kingdom, Olalekan Emmanuel told PLATFORMTIMES that he is used to paying at the terminal whenever he is returning to the UK because he would always allow his cousin to follow him to the check-in counter.

“Those guys are my usual people, they collect money from me each time I am going back to the UK so that my cousin could follow me to the check-in counter.
“Though, it the amount varies, at times N5,000 there was a time I gave them N10,000”.

Corruption extension
PLATFORMTIMES findings at the airport revealed that the culture of extortion is not peculiar to security officers, it is widespread even among officials of the airport.

“Go through that way, you’ll see the toilet” said a middle-aged woman dressed in a black and white t-shirt.

After some minutes, this reporter came outside, by this time, the woman had waited for the reporter to come out.

She stylishly stretched her hand and said “boss give us anything you have now, you know it is not easy”. The reporter offered a single N500 note. She grabbed it with joy all around her face, and then launched into prayers for her benefactor.

When this reporter left the arrival section after about 30 minutes of waiting, he headed back to the terminal to retrieve his phone from the police officer.

“Now that your uncle has arrived, you supposed to give us something, you no go sha give us all the goodies wey him bring from the UK” one of the officers said in pidgin English.

“I have given the woman police something, didn’t she extend it to you?” the reporter queried the officer.

“That one na small thing, I dey talk about better thing” the officer responded.

The reporter opened his wallet, handed two N500 notes to the three officers and collected his phone. 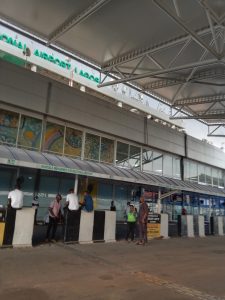 Sabbatical said the facility and the activities going on perfectly detail corruption. He tours the world and shares experience with followers. He lamented how airport staff requested money at different points.

Forastero posted the video he made within the airport on his YouTube page.

“I have been around the world, and I have never seen anything like this. I mean, it’s extremely corrupt. Picture corruption.

“The Nigerian airport, the Lagos airport is that very definition of corruption that would pop up in a dictionary. Everywhere”, he said.

The criticism by Sabbatical came weeks after another American, Alina Oliver accused the international airport workers of corruption. 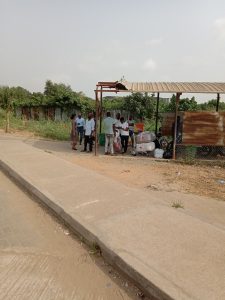 Officers beg from travellers for ‘welfare’
It was a surprise when this reporter sighted police officers running after travellers at a small checkpoint to the departure section, demanding they should contribute to the welfare of security officers.

Dressed in a black t-shirt with the inscription Remembrance of Armed Forces Day (RAFD), they held a can where they kept money just like the way students of higher institutions do when they go about their ‘rag days.’ 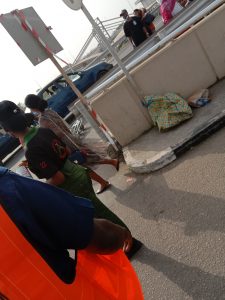 Some of the travellers felt embarrassed as the officers ran towards them, asking for contribution to the welfare of security officers. While some gave out what they could afford, others simply ignored the officers.

“I do not know which country something like this can happen, they are just painting Nigeria badly to foreigners. What is the meaning of all this?” one of the travellers grumbled towards the entrance of the terminal.

The traveller’s lamentation caught the reporter’s attention and so he decided to further observe how frustrating the behaviour of the officers could be.

As the reporter walked towards the area, one of the officers whispered, “Fine boy, come” Since the reporter knew the reason for the ‘fine boy’ comment, he opened his wallet and offered the officers N500. And then prayers of gratitude for the reporter’s generosity poured out in return: “God bless you. May your days be long. Thank you.”

In 2017, then Acting President, Yemi Osinbajo signed three Executive Orders aimed at facilitating the ease of doing business in Nigeria. The orders, Mr. Osinbajo said at the time, essentially sought to save time and cost, and promote transparency and efficiency in the business environment.

The order, to a certain degree, conforms with the government’s resolve to generate more money from travel and tourism, considered an important source of revenue for the government. In June, the bureau of statistics said tourism accounted for 34 per cent of GDP and about 20 per cent of the nation’s employment creation in 2017.

The order states among others that :” There shall be no touting whatsoever by official or unofficial persons at any port in Nigeria.

It further directed that all non-official staff should be removed from the secured areas of airports. 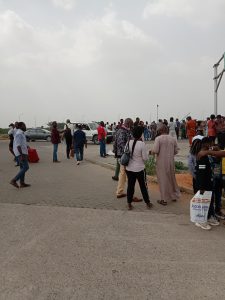 “No official of FAAN, Immigration, security agency or Ministry of Foreign Affairs (MoFA) or any other agency is to meet any non-designated dignitary at any secure areas of the airport.

“The officially approved list of dignitaries that have been pre-approved to be received by protocol officers shall be made available to AVSEC and other relevant agencies ahead of their arrival at the airport,” it said.

Also, according to the executive order, any official caught soliciting or receiving bribes from passengers or other port users shall be subject to immediate removal from post and disciplinary as well as criminal proceedings in line with extant laws and regulations.

In compliance with the executive orders, the Federal Airport Authority of Nigeria (FAAN) introduced new check-in procedures for passengers following global standards. The agency introduced a central screening and check-in point for passengers, irrespective of the airline they are travelling with. Accordingly, all customised check-in counters used by airlines were removed at the Murtala Muhammed International Airport.

FAAN had issued warning to visitors and travellers to stay away from parking spaces, and not to wait at the entrance of the terminal. 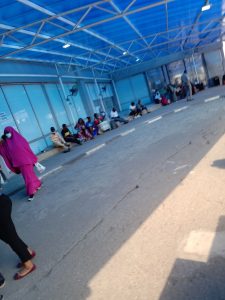 The order, written boldly on the wall, stated that anybody found guilty would pay N50,000 as penalty. But visitors and some travellers were sighted lobbying around the terminal area. 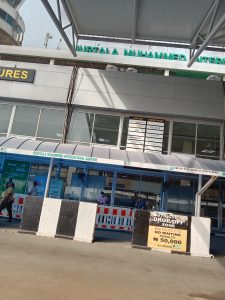 While some sat on the wall, many others were sighted sitting on the floor despite the warning. 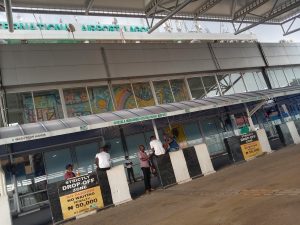 When this reporter contacted Henrietta Yakubu, the spokesperson of FAAN, she said she would send her response through email. Questions and the email address of the reporter were sent to the Yakubu’s phone number.

However, as at the time of filing this report, she had yet to send her response.

This story was funded by the African Centre for Media & Information Literacy (AFRICMIL) with support from MacArthur Foundation.

Tinubu believed his Lagos style of politics can be replicated in Yoruba states, others -Akande