Tragedy struck on Sunday  on the Lagos-Ibadan Expressway, Luwape in the Obafemi-Owode local government area of Ogun state as four travelers lost their lives while 14 persons sustained varying degrees of injury in a road crash. 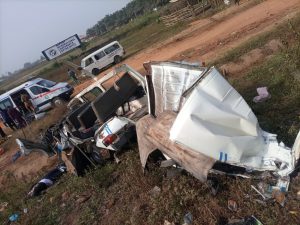 PLATFORM TIMES gathered that 20 persons who comprised 12 male adults and eight female adults were involved in a fatal accident which occured on Sunday at 3:40pm and involved a truck and a Mazda bus with no registration .

“Two vehicles were involved with no registration number on both vehicles, a Mazda bus and a truck.”

Okpe said the suspected causes of the crash were speed and dangerous driving on the part of the truck driver who reportedly veered off his lane and suddenly faced the Mazda bus.

According to her, the bus suddenly lost control due to speed and crashed but unfortunately the truck escape .

She said the injured victims have been taken to a private hospital in Sagamu for treatment while the dead bodies have been deposited at the same hospital Mortuary.

Okpe said the Sector Commander however, cautioned motorists on dangerous driving, advising them that life has no duplicate .

“He Commiserated with the family of the crash victims and enjoined them to contact FRSC Mowe for more information about the crash.

Desperate couple sells their one month old child for N50,000