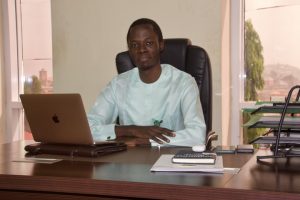 Durodola, a 24-year old scholar from the University of Ibadan who recently obtained M.A in African Studies (Diaspora and Transnational Studies) with a CGPA of 6.7/7.0, was announced runner-up of the 5th Border Criminologies Dissertation Prize for 2021.

PLATFORM TIMES gathered that the
award was put together by Routledge and Oxford University’s Centre for Criminology and Border Criminologies to support early career researchers working on citizenship, migration and the intersections between border controls and criminal justice.

Durodola, whose Master’s thesis is entitled: ‘Narratives of the Journey to Exile and Transformative Agency of Residual Liberian Refugees in Oru, Southwestern Nigeria’, won the second place .

PLATFORM TIMES further gathered that Durodola’s research was conducted under the supervision of Dr. Senayon Olaoluwa at the Institute of African Studies, University of Ibadan.

Tiphaine Le Corre from University of Oxford won the first place with the thesis titled: ‘The Politics of Deterring Unwanted Immigration to the United Kingdom’.

Prof. Mary Bosworth, Director of the Centre for Criminology and Director of Border Criminologies, University of Oxford, disclosed this on Thursday in a newsletter.

According to the official statement, Durodola and Tiphaine beat a strong shortlist of 10 others from universities in Europe, Asia and other African countries to win the prize.

The competition was judged by a panel made up of academics and members of the Border Criminologies’ core team and the Advisory Group.

The Panel assessed the dissertation in terms of its quality and originality, and its contribution to the body of knowledge about border control and migration.

Durodola set a new record by becoming the first African and postgraduate student from a University in the Global South to make the top two places of the Border Criminologies Masters’ Dissertation/Thesis Prize since the inception of the competition.

The past winners and runners-up of the award were from Oxford, Cambridge, Glasgow and Amsterdam Universities.

Durodola’s appointment in August 2021 made him the youngest political appointee in the state, and further reinforces his outstanding abilities and intellectual foresight.

I Am Not Yet Married Because I am Not as Rich As My Dad, says Kiddwaya