Actress-filmmaker Funke Akindele has shown off some of the awards she has won over the course of her career in an Instagram post. 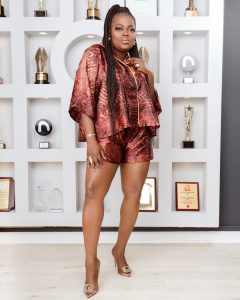 PLATFORM TIMES observed that the 44-year-old actress shared photos of herself showing off the awards behind her.

Some of the awards include her Africa Magic Viewers Choice Awards (AMVCA) and Africa Movie Academy Awards (AMAA).

Captioning the photos, Funke wrote with the hashtag, “#staypositive in 2022.”