The remains of Olubadan of Ibadanland, Oba Saliu Adetunji, have been interred at his Popoyemoja Palace, Ibadan amid tears and weeping. 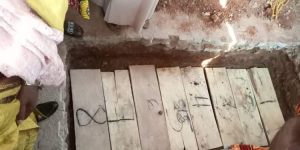 PLATFORM TIMES gathered that the
corpse was returned to the palace at about 4:35pm from Mapo Hall where a lying in state and prayer held.

His remains were received by the Chief Imam of Ibadanland, Sheikh AbdulGaniy Agbotomokekere.

He was accompanied by top Islamic leaders.

Meanwhile ,thousands of indigenes and residents of Ibadan witnessed the burial.

The two compounds had started playing host to visitors, shortly after the news of the demise of the current Olubadan, Oba Saliu Adetunji, was announced.

At the Aliiwo Family Compound of Chief Balogun, NAN reports that traditional drummers were seen singing songs of praises for the incoming Olubadan to the admiration of family members and well-wishers.

Also, at the residence of Chief Balogun, a former Senator, at Alarere, near Iwo Road interchange Ibadan, community heads, family members, and other well-wishers were seen in large numbers waiting to meet the incoming Olubadan.

Few of the visitors were, however, allowed to meet Balogun in his private room, while others were disallowed by security personnel guarding the house.

Some of the family members who spoke with NAN expressed joy for making it possible for their family to produce another Olubadan after long years of waiting.

One of the family members, Mukaila Adebisi, said the last time Aliiwo Compound produced Oba Memudu as Olubadan, was in 1952.

Meanwhile, the Aareonakakanfo of Yorubaland, Gani Adams, on Sunday described the death of Olubadan of Ibadanland, Oba Saliu Adetunji as a huge loss.

Aare Gani Adams, in a statement by his Special Assistant on Media, Mr. Kehinde Aderemi, expressed shock at the news, saying the late Oba Saliu Adetunji was mostly loved by sons and daughters of Ibadanland, having the most peaceful reign in Ibadan in recent times.

He said, “I feel bad at the news of Kabiesi’s death, however, I am happy he died a hero.The late Oba Adetunji, in his life, brought immense development to Ibadanland.He was very mature, pleasant and peaceful.

“The late Olubadan was never controversial. He was among the prominent Obas that graced my installation ceremony as the Aareonakakanfo of Yorubaland in Oyo, in January 2018.

“And he had a robust relationship with the Alaafin of Oyo, Oba Lamidi Adeyemi III, throughout his reign.

“Kabiesi’s mature and peaceful life was in display throughout his reign and it was evident that Ibadanland had peaceful and great moments in history during his reign.

“Very Pleasant, the late Oba Saliu Adetunji was a brave man with distinct records of successes. Kabiesi’s five years reign was a milestone and we can hardly forget his immense contributions to the ancient town of Ibadan as well as the traditional institutions.”

The 93-years-old Oba Adetunji, who ascended the throne in March 2016, was said to have died early hours of Sunday at the University College Hospital in Ibadan, Oyo state