The Awaujale of Ijebuland, Oba Kayode Adetona has assured the Ogun state governor, Dapo Abiodun of a second term following the signing of controversial bill regulating installation and burial rites of traditional rulers in the state. 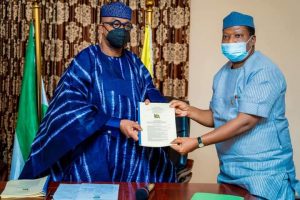 The monarch who spoke at his residence when the governor brought the copy of the bill to him noted the signing will make Muslims and Christians vote for the governor in 2023. 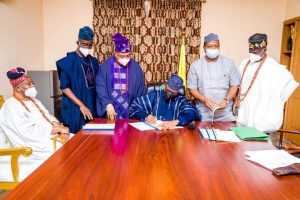 Speaking at the signing of the bill, Oba Adetona said both Muslims and the Christians “are grateful to him for signing the bill.”

“On behalf of all Muslims in Ogun State, I as the chairman of the State council, I am assuring you of their support, our Christian brothers and sisters in the State they told me they are wishing you a second term in office.”

The bill also sought to make “a law to provide for the Preservation, Protection and Exercise by Traditional Rulers of their fundamental rights to be installed and buried according to their religions or beliefs and for other related matters.”

The bill was first presented at the legislature in the early months of 2020 and it scaled through the second reading on March 3,2020.

Traditional worshippers had opposed the bill ,warning the monarchs and the State House of Assembly over the bill.

The traditional worshipers had alleged that it was an attempt to erode the culture of the Yorubas.

But the proposed legal framework was met with stiff resistance from the traditionalists in the state.

The Assembly had in June, 2020 fixed the bill for a public hearing, but, was later suspended indefinitely following the controversy.

However, more than a year after the delay, the proposed legal framework was re introduced in July 2021 in the assembly with a slight modification to its title.

However, despite stiff resistance from the traditional worshippers, the assembly passed the bill late last year and forwarded it to Abiodun for his assent.

Governor Abiodun was at the Awujale’s palaace alongside the Speaker, Olakunle Oluomo, the Chairman of the State Traditional Council and Akarigbo of Remoland, Oba Babatunde Ajayi, the Olu of Ilaro, Oba Kehinde Olugbenle and the Attorney General and Commissioner for Justice, Oluwasina Ogungbade, signed the bill into law.

Speaking shortly after he signed the bill into law , Abiodun said the new law now empowers the families to determine how remains of monarchs would be buried.

He said “The traditional institution is the oldest form of administration and a very dependable and reliable one at that.

“This law was promoted by kabiyesi, the Awujale during his tenure as the chairman of the Ogun state traditional council.

“I believe that one of the unique things about this law, besides the fact that it spells out a method of selection of Obas and chiefs, is a clarity that this law now provides as it relates to the passage rites of our kabiyesis (Monarchs).

“Of course without prejudice to traditional rites that is meant to be performed by the customary, but it clarifies and removes any ambiguity about the fact that the families of our kabiyesis now have a say in how they want our royal fathers to be buried and I think this is very laudable.”

Gunmen Kidnap Another Monarch In Imo, Kill One

2023: I have told Buhari of my intention to run for President, says Tinubu

2023: I have told Buhari of my intention to run for President, says Tinubu