I lost my brother, six friends to Boko Haram attacks , how can I be its sponsor , Ali Modu Sherif declares

The strong aspirant of National
Chairman of the All Progressives Congress , Ali Modu Sheriff has broken his silence over the allegation that he was a sponsor of Boko Haram insurgency. 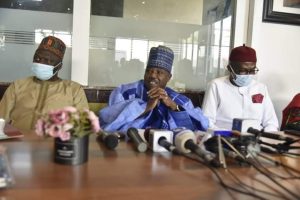 Sherif said it stands the logic in the head that he would be sponsoring Boko Haram attacks and yet members of the deadly group would kill his brother , his six intimate friends, chairman of his party and his cousin .

The APC national Chairman hopeful has been getting more support in the race for the most coveted seat in the ruling party.

On why he had kept quiet for long about the allegation, Sheriff said the wisdom in his silence was to enable unhindered investigation by authorities.

He said, “I don’t know Yusuf, who is the leader and founder of Boko Haram. I have never met him until he was arrested by the military…in detention in the military barracks. He was never brought to the Government House, contrary to speculations.

“And look, Boko Haram sect meted the highest terror on me. If I am a Boko Haram member or sponsor; my brother was killed, the chairman of my party was killed, my cousin was killed, six of my closest friends were killed. Therefore, how could I be a Boko Haram sponsor and I am also a target? Does it make any sense to you?.

“I decided to keep quiet at a time because, after leaving office, I want to allow the government, since I have left office, to do their investigations to find whether I’m linked to Boko Haram or not as speculated on the pages of newspaper.

” No responsible government in this world will allow any terrorist to go free. And how can I be sponsor to somebody that I don’t know? Does it make sense to you that somebody I don’t know, I will be his sponsor?”

“I have no link with Boko Haram . What I know in record, as the Chief Security Officer, is to be used by security. Getting security report is different from knowing the individuals. And we used the security report to do what we did.

“I created a law banning them, which is the reason I became a target of their terror activities. I also deported some of the Nigeriens who who were members, particularly Abubakari Kilakema, who was deported to Niger. I took every step as Chief Security Officer of the state to ensure that Boko Haram do not operate in my domain.”

On political Boko Haram finger pointed at Ali Modu Sheriff, the former governor said”The political Boko Haram that people refer to are facing court charges. You can see that there is senator of the Federal Republic now, who is now facing charges in court for prosecution. Therefore, nobody, the law of Nigeria is not protective of anybody.”

He said “I told you that I was never invited in connection with Boko Haram.”