Scores of traders in Kuto and Oba Lipede markets were stranded on Thursday as officials of Ogun state government sealed off their shops over filthy and unhygienic practices in and around the market place. 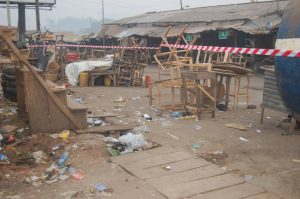 PLATFORM TIMES observed that heaps of refuse and indiscriminate dumping of refuse pervaded the entire stretch of the market despite the functional public refuse bin.

The refuse bin was seen conspicuously positioned around the market by the government for use, yet, the marketers blocked the drainages and engaged in indiscriminate dumping of refuse in the market .

Special Adviser to the Governor on Environment Ola Oresanya on Thursday, led the officials of ministry to shut the markets .

Oresanya while speaking after the markets were shut said the action
became imperative in order to ensure personal and environmental hygiene and ensure public health in and around the market .

Oresanya who is also the Chief Executive Officer of the Ogun State Waste Management Authority said the government was took the step to restore sanity into the market .

He said ” this action has become imperative in order to avert disaster and ensure good public health despite previous warnings and meeting with the leadership of the market.”

Oresanya disclosed that the State government has commenced Markets Sanitation Seminar for market leaders and traders at Kuto and Oba Lipede markets in Abeokuta in other to improve cleanliness in all its recognized markets.

He said “the seminar became necessary to take the traders through modern ways of trading in cleaner environment especially now that all emphasis are on public hygiene and safety.

“For maximum concentration,the traders are to close their shops and stalls during the period of the seminar

“The seminar will expose them to practical ways on keeping markets clean at all times especially solid waste management, eradication of rodents and pathogens and causes and solutions to environmental infractions in and around market places.

“At the end of the seminar,they will be able to organize the markets properly to overcome the previously mentioned challenges which will rub-off on the safety of foodstuffs and other commodities sold at the two markets”he added.

“The Market Sanitation Seminar will be held regularly for all market leaders and traders in all markets in Ogun state to improve their cleanliness and public acceptability.”

Following the closure of the markets ,traders were seen appealing to the government to reopen their shops.

But, the government insisted that the markets will remain shit until the taders comply with extant laws of the state on cleaner environment