There was a mild drama on Sunday when a man was left in shock after his girlfriend rejected his marriage proposal in front of church members. 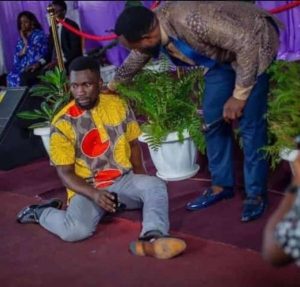 PLATFORM TIMES gathered that the
man identified as Bro John had earlier informed his pastor that he wanted to propose to his girlfriend, sister Favour during service on the church alter in front of congragations.

Upon bringing out the ring to propose to the said Favour, she was shocked and immediately ran out of the church without accepting the proposal.

Consequently, the said Bro John fainted but was later revivied by church members.

It was learnt that Bro John had suggested that himself and his girlfriend, sister Favour wear the same outfit to church because of the engagement plan he had in mind.