July 2021, the Ogun state Governor, Dapo Abiodun boasted of completing a total of 325 projects across the state in two years. SODIQ OJUROUNGBE tracked some of the projects and discovered that many of the projects were either abandoned half-done, or not carried out at all.

In 2020, the state government went to Unity High School, Ago-Ika area of Abeokuta North Local Government of the state on a mission to embark on complete rehabilitation of some classrooms at the school. The project reportedly started on a good note as partial work was done on some of the proposed classrooms, but the project got stuck at the roofing level.

PLATFORM TIMES gathered that the roof was removed since 2020, and the government has reportedly failed in putting another roof on the rehabilitated classrooms.

Even though the government in a scorecard flyer released on social media claimed to have completed the rehabilitation of the proposed classrooms, investigation by PLATFORM TIMES discovered that not much has been done on the building since the beginning of 2021.

During an on-spot assessment of the purported rehabilitated classrooms, it was observed that skeletal work was done without roofing.

Residents in the area claimed nothing has been done since 2020 that the government has reportedly claimed to have rehabilitated some of the classrooms.

The residents said nothing was done to ensure completion for over a year.

Just about 500 meters from Unity High school is AUD primary school where the government claimed to have embarked on complete rehabilitation of some classrooms.

PLATFORM TIMES however discovered that the school classrooms were open and remained abandoned for several months after.

The Abiodun’s 325 projects in two years

For any Governor Abiodun’s project, the yellow colour is a symbol which many used to differentiate his projects from any other projects across the state.

PLATFORM TIMES findings showed that most of Governor Abiodun’s projects across the state were painted yellow, while some even have yellow roofs to indicate they were projects done by his administration.

In a flyer released by the state government to mark two years in office, about 155 projects were reportedly carried out in Abeokuta North and South Local Government Areas of the state within first two years of Abiodun’s administration.

Also, the Chief Press Secretary, Kunle Somorin in a statement made available to newsmen last year July said 325 projects were carried out in two years across the 20 LGs of the state.

But when PLATFORM TIMES visited locations of some of the projects in Abeokuta North and South LGs, it was discovered that many of the projects listed were either abandoned half-done, not carried out at all or met with false claim and irregularities.

During investigation, PLATFORM TIMES also discovered that few of the projects were literally completed, while some were ongoing.

At Owu Baptist school, Ita-Iyalode in Oke-Shokori/Totoro ward, the government claimed to have rehabilitated some classrooms. However, this reporter discovered that the classroom were still under construction and it has become abandoned.

The artificial stairs constructed round the building so as to ease plastering could be sighted. Some of the planks used in constructing the artificial steps are decaying.

Although, painting was supposed to be part of the rehabilitation process, but it was discovered that not all the supposed building have been plastered while government has allegedly abandoned it.

Speaking with a staff at the school simply identified as Baba Jamiu, he told this reporter that the project has remained like that for some months.

Baba Jamiu told this reporter that the students are already using the rehabilitated classrooms even though it was under-locked during the visit.

He added, “leaving this artificial steps after plastering is dangerous. They don’t have any usefulness, but the government has refused to come and remove it.

“The students are already using it that way because we don’t even have enough building in this school.

“Part of the rehabilitation was to plaster and also pain the building, but they have failed in doing that, they just abandoned it halfway which is really bad.”

The project at AUD 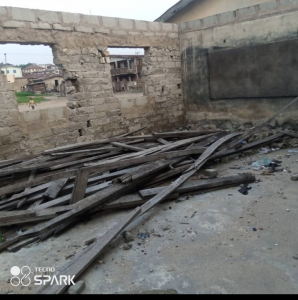 It was a different story entirely at AUD primary school, Oke-ido in Ago-Ika ward of Abeokuta North Local council. The supposed building marked for rehabilitation was abandoned. The building has become an abode for smokers around the area.

When this reporter got there, some young men could be seen smoking . Inside the building, planks which have decayed could be sighted littering every parts of the building.

It was however gathered that the renovation of the building started in 2019 after the emergence of Governor Dapo Abiodun. The residents around the area however said nothing has been done about it in the last two years.

Going round the compound to confirm if there is any other building, it was discovered that many of the roof in the classrooms have been damaged. The structure in the school building look weak, while the environment look unattractive to academic learning.

Also, at St. Peter’s College, the government claimed to have rehabilitated some classrooms, but a visit showed that while the complete ceiling of one of the classrooms were changed, the other classrooms meant to have been rehabilitated was not completed.

Although the building which accommodates about four of classrooms has a yellow roof. But, the walls were not plastered, there were no windows in the building apart from buglary and the building does not look like it is ongoing.

One of the gate men who took this reporter around said the building has been completed despite not being plastered with an open windows.

Part of the project listed was the ongoing construction of Olomore Junction to Sanni road. The project is currently ongoing as the construction company could be sighted working on the road during the tracking.

Although, the motorists plying the road complained of how narrow the road has become, but works are going on the road as construction of drainage could be sighted on the two sides of the road.

It was the same story at the Lafenwa-Rounder-Olohunda Ayetoro road, work is ongoing on the road from Crescent down to Rounder. The workers of the construction company were sighted working on different parts of the road.

Getting to Holy Prophet School, Ago-Ika, the rehabilitation of classrooms has been completed and is presently being used by the Pupils.

Also the Iberekodo primary health centre was renovated with modern facilities as listed. However, the 2.5 KVA solar energy provided for the health center was not working.

Speaking with one of the nurses who pleaded anonymity she said the Solar energy has been fluntuating since it was installed in the centre.

At Lafenwa High school, PLATFORM TIMES discovered that the project only started in December, 2021 after the first term holiday.

Security officer at the school who took this reporter to the classrooms under renovation said nothing was done in the school untill December 2021.

During the on-the-spot assessment, it was observed that plastering and changing of some of the roof were presently ongoing.

Part of the projects the government claimed to have done in Abeokuta South LG is a tourism attraction at Asero Kampala market. But a visit by PLATFORM TIMES showed that the project has not started.

Speaking with the Iyaloja of Asero market, Oluwakemi Oloyede, she revealed that the government has not started the project.

Oloyode explained that the site for the project has been allocated waiting for when the government will commence work.

She said, “they have not started the tourism project, they will start that very soon. But they have completed the 50 open stalls and a water project for the market.

“There is already a site for it, but they have not started.”

Another project the government claimed to have done is the renovation of some classrooms in Egba High school, Asero. But when our reporter visited the site, it was discovered that the government just started the project in December 2021.

The security officer at the school said, “They are doing some renovation, but they are not done with it.

“They started work here around December till 30 of the month . There is no other building under renovation here.”

But it was observed that the only building under renovation at Egba High school has blue roof instead of the popular yellow roof the Abiodun-led government has been known for.

This reporter could not ascertain if the building is being renovated by the government or another person.

Going round the school compound, it was observed that no other new building or classrooms was under renovation.

Moving to St. Micheal primary school, Itoko where the government claimed to have done a complete renovation of some classrooms, it was observed that the project has become abandoned.

PLATFORM TIMES observed that the classrooms of four blocks were abandoned as it was sorrounded by weeds .

It was also observed that part of the building has become an abode for smokers as they could be sighted hanging around the building.

When this reporter spoke with some of the smokers and residents of the area, they claimed government has stopped work on the building for more than six months.

Part of the project the state government claimed to have done is rehabilitation of borehole at Itoko community in Abeokuta South LG. But findings by PLATFORM TIMES showed that there was no water project in the community.

Asking more than six residents of the community, they claimed not to be aware of any water project carried out in the community.

Meanwhile, PLATFORM TIMES discovered that some of the projects listed in the graphics were completed on some of the locations visited.

However, findings by PLATFORM TIMES showed that the school projects carried out by the state government were N10.2 billion counter part fund received from the Universal Basic Education Commission.

PLATFORM TIMES gathered that the UBEC had sometimes in the 2019 released about N10.2 billion counterpart fund to rehabilitate 236 public schools across the state.

It was further learnt that the counterpart fund was also a matching grant for four years from 2014 to 2017 basic education intervention projects.

At some of the projects the government boasted to have done in two years, it was discovered that a signpost indicating that the project was UBEC-financed project was erected at almost every site where renovation has been completed.

Reacting, a leading opposition party in the state, New Nigeria People’s Party has called for thorough investigation into the “widely celebrated” projects by the Abiodun-led government.

The NNPP state chairman, Olaposi Oginni said there is need for the Economic Financial Crimes Commission to investigate some of the activities of the present government in Ogun state.

Oginni said, “the 325 Projects claimed to have been completed by Gov.Dapo Abiodun’s Administration is laughable..
The New Nigeria People’s Party NNPP investigation shows that most of these acclaimed projects are mostly abandoned.

“It’s also on record that some of these projects are Utopia. They exist Only on papers and the wishful thinking of this clueless administration of misplaced priorities.

“The Ogun State Chapter of New Nigeria People’s Party has discovered gross financial recklessness and maximum corruption in most of the contracts awarded by Dapo Abiodun’s Administration that needed the searchlights of Economic Financial Crimes Commission. ”

Toyin Amuzu drills borehole for Ogun community, as residents shower praises on him

Toyin Amuzu drills borehole for Ogun community, as residents shower praises on him