No, FG did not suspend aircraft movement in Nigeria

A report posted on a blog claimed the Federal Government had suspended movement of passenger aircraft in the country.

The report stated that for aircraft to move in the country, the Federal Government would need to issue special permit to such aircraft.

A news report claiming the Federal Government had suspended movement of passenger aircraft, both commercial and private jet in Nigeria.

The news report was posted on a blog on January 27, 2022 with the headline ‘BREAKING: Buhari Suspends Aircraft movements in Nigeria’.

It claimed President Muhammadu Buhari made the order in a nationwide broadcast on Sunday, January 23,20

The report reads “President Muhammadu Buhari has suspended the movements of all passenger aircraft, both commercial and private jets in Nigeria.

“He announced the suspension during a nationwide broadcast on Sunday.

“Movements of all passenger aircraft, both commercial and private jets are hereby suspended. special permits will be issued on a need basis,” he said, Details later”.

Checks by PlatformTimes on Federal Airports Authority of Nigeria (FAAN) website showed that there is no information regarding the suspension of aircraft in the country. 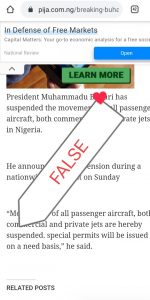 Findings also showed that President Muhammadu Buhari has not hold any nationwide broadcast since the beginning of the year.

Buhari only appeared for an interview on Channels Television on Wednesday, January 5, 2022 at 7pm.

The President also appeared for an interview on NTA on Thursday, January 6, 2022 at 8pm.

In the two interviews, President Muhammadu Buhari did not talk about aircraft, he only addressed burning issues in the country, including insecurity, economy and politics.

PlatformTimes in verifying the claim has confirmed that the report is misleading. The public should therefore disregard the report.

NDLEA nabs Idian businessman for smuggling over 134,700 bottles of codeine into Nigeria

Kidnapper: Forgive Me, My Wife Just Had Baby