In a statement jointly signed by Ogun State Commissioner for Health, Dr Tomi Coker and the Executive Secretary, Primary Health Care Board, Dr Elijah Ogunsola, claiming that the state government had made a significant investment in primary health care by providing consistent availability of basic amenities such as potable water and constant power supply. But findings by PLATFORM TIMES revealed that many of the health centers still lack access to power supply and portable water. ABDULQUDUS OGUNDAPO visited health centers in different parts of the state to investigate the situation of power supply and water system as claimed by the state government.

In May 2021, Kafayat Adeleye went into labour in the late hour. She was rushed to Ijeja health center in Abeokuta South local government of Ogun State where she was expected to deliver but, due to lack of power supply and other medical kits, she needed to be transferred to Ijaiye General Hospital, Abeokuta for safe delivery.

“Arriving at Ijeja health center, there was a chargeable lamp placed at the top of the roof. The lamp illuminates the health center.

“Not long after my arrival, an aged man who claimed to be a doctor was seated at the reception. He approached me and tried to help me deliver despite the electricity failure.

“My husband was not comfortable with the situation. He whispered into my ear that the doctor might not be capable. He suggested we should go to another hospital.

“Not long after the doctor said he would take the sample to another hospital, my husband went to the bus-stop and arranged a car to take me to Ijaiye General Hospital. That was where I later delivered”.

The story of health centers without power supply is not restricted to Ijeja health center, it extended to other health facilities in different parts of the state.

PLATFORM TIMES findings showed that, many of the health centers have resulted to using rechargeable lamps and candles to take delivery at night as a result of power failure.

While some of the health centers suffer from irregular power supply, many others still lack access to portable water.

PLATFORM TIMES Investigation also showed that there is shortage of staffs and non-availability of drugs at the health centers our reporter visited.

In September 2021, a mother who identified herself as Folashade went into labour around 9pm. She went for delivery at Ita Marun Health Center in Ijebu-North East local Government area of Ogun State.

The nurses had no other choice than to make use of torch to illuminate the labour room for Folashade to deliver safely because there was no other means of electricity.

Overnight, she delivered a baby boy and was placed on an insect infected bed in the center’s labour room, exposing the new baby to a series of infections.

Aside from delivering Folashade’s baby with torch, the state of the health center was deplorable.

The nurse who took the delivery of Folashade’s baby confirmed to this reporter that, she used torch to illuminate the labour room.

The nurse who spoke on condition of anonimity stated that, she used torch for her to see clearly in the labour room.

“It is the normal process of delivery. Torch is just to help me to see what I am doing, and it was successful” she said.

When this reporter visited the center at 8:30pm on Tuesday, January 3, the center was in total darkness. 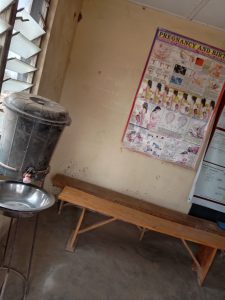 The patron said, nurses light candle or use torch in the center whenever they have patients in the night.

She lamented low level of delivery, which she attributed to lack of basic amenities.

“We usually use chargeable light or candle in the night whenever we have patients. The problem is that, there is no electrification in the center at all.

“At the time of delivery, most of the expectant mothers we have in this center do not use to come for delivery, they only come here for medical check-up. They always give different excuses for not coming to deliver here. Some will say they travelled while others will claim they prefer to deliver at home”. The patron said.

The problem of power supply is extended to Atan Primary Health Center in Ijebu East Local Government of Ogun State.

Dark labour room, dilapidated building, peeling wall, shortage of staff, lack of medical kits among other challenges seemed to have been ignored in the center.

A nurse within the facility who spoke with our reporter on condition of anonimity said “My phone has been dead for two days now, since there’s no light.There’s nothing we can do.God is our security here.”

The situation is similar in Iperu Primary Health Center, Ikene where this reporter discovered non-existence of power supply.

Ogere Health Center, Ogere was renovated after the series of agitations by the residents but when PLATFORM TIMES visited the center, it still lacks existence of power supply.

This reporter gathered that nurses at the Ogere Health Center use torch to take delivery.

One of the nurses who spoke on condition of anonimity said they had written to the government to restore electricity in the center but all their efforts were abortive.

“We use torch to take delivery, there’s nothing we can do. We have lodged several complaints to them yet there’s no light.”

Another rising challenge…water stopped running since 30 years ago

Aside from the fact that some public health centers lack power supply, the non-existence of portable water in the facilities means that either patients bring water from home or nurses go miles to fetch water for the patients’ use.

At Ita Marun health center, nurses lamented lack of availability of portable water. The nurses told this reporter that they fetch water from a secondary school not too far from the center.

A tap water was constructed outside the health center, when PLATFORM TIMES enquired about the tap , the nurses stated that the tap had stopped functioning since 30 years ago.

“It has been over 30 years that public water worked last. We get water from the nearby secondary school.

“At a point in time, we fixed a tap here, running water from the school to this health center but the pipe was faulty. Since then, we have been going to the school to get water.

“There is no provision for generator. No financial support from anybody including the government”.

When PLATFORM TIMES visited Premiere Health Center, Abeokuta, there was no sign of portable water in the health center.

Shortage of staff, lack of drugs

Despite the beautiful structure of Ajana Orile-oko Primary Health Center in the Remo North local Government area of Ogun State, the center remains short of staff and drugs.

It was gathered that the health center served other twelves villages aside from Orile-Oko.

This reporter discovered that, only two nurses were assigned to the center.

At Premier Health Center, Abeokuta , nurses confirmed to PLATFORM TIMES that there was no drugs at the center.

When this reporter visited the center complaining of severe headache, the nurse who attended to the reporter gave him few tablets of drugs, urging the reporter to get the remaining at any pharmacy.

A professor of Medical Laboratory Science, Professor Oladele Hassan described the situation as disappointing, saying the government are treating health workers like slaves.

Professor Hassan told PLATFIRM TIMES that, nurses who work in primary health centers without power supply are not working under normal condition.

The medical expert noted that , delivery using lamp or candle would expose both the health workers and the patients to danger.

He urged the state government to equip health centers in the state with generator in other to ensure stable power supply.

“It is not okay. I am hearing this for the first time. The implication is that those doctors and nurses are exposing themselves to danger, even for the patient that is giving birth, it might lead to death , infection and so many other things. Those health centers should have referred their patients to other hospitals where they have facilities.

“The implication is that the caregiver can be infected, they are not working under a normal condition, infact they are treating them as slaves. They can contact infection from such situation and still take it to their houses.

“They are unjustified to the people that are receiving the care. Hearing that nurses has to light candle or lamp in the night to deliver baby is surprising to me. The government should be able to provide at least a generator at every health centers. These are part of the reasons why some health workers usually reject transfer to rural areas”.

When this reporter contacted Dr. Tomi Coker, the Commissioner for Health in the state, she did not respond to the calls nor text messages sent to her.