The Old Student Association of Abeokuta Grammar School, Idi aba, Abeokuta, Ogun State has accused a real estate company, an ex teacher of the school and some unidentified individuals of encroaching the school’s land. 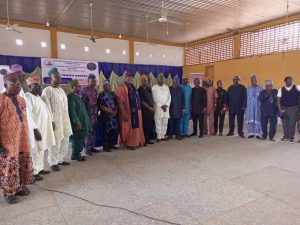 The President of the Association, Sunday Oduntan made this accusation on behalf of his colleagues and the school during the conference of the Old Students and Alumini Association of Western Nigeria held in Abeokuta Grammar School, in Ogun State.

Oduntan claimed that one graceland estate, one ex teacher of the school and some other people had already erected structures on the land belonging to the school.

The Association’s President however said that the association on behalf of the school will challenge the encroachment, adding that they know the law is no respecter of anyone no matter how big they think they are.

His words ” We all come together to look at our common challenges, look at how we can help our various state governments. Government cannot do it alone.

“97 per cent of the infrastructure in this school was built by the old students. We need to continuously assist the government in ensuring that our students do not lack anything. We also need to come together to solve the problem of land encroachment. Our lands have been encroached, we have decided to take our land back.

“Our school was established in 1908 and they moved us from our original site when the Federal Government wanted to use our school for Federal College of education.

“Later they used it for FUNNAB. Now, we move to our new site in 1967, we bought this land from 1958 and we complete all the paper work by 1968. Yet some people including former teacher of this school went there to build houses on our land. We have no problem with them. All we are saying is that we shall fence the land for the security of our students. We have documented everything since 1970

“The encroachers have been very violent, especially the one called Graceland Estate. For attacking our people, we will show them that the law is not respecter of anybody. They have continued building and that is the most shameful part of their action.

“The law is no respecter of anyone and we do not believe that people should think that they are big men with that level of impunity.

“Any politician that wants to win election in 2023 in this Egbaland, must not embark on the act of illegality because we shall go out and campaign against them. We shall name them because our forefathers bought this land for us.”