Ahead of the 2023 Presidential election, the campaign posters of a former National Chairman of the All Progressives Congress (APC), Adams Oshiomhole and the Governor of Central Bank of Nigeria (CBN), Godwin Emefiele, have surfaced in Abuja. 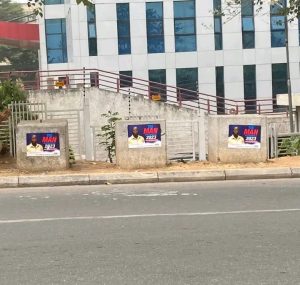 Oshiomhole campaign posters which introduced him as ‘the man’ for the 2023 presidency were sighted in Abuja on Friday.

Also on Friday, the campaign posters of the CBN governor, Emefiele, who has also not openly declared his intention to join the 2023 presidential race, have flooded Eagle Square in Abuja, the venue of the National Convention of the APC slated for Saturday, March 26.

A top source in the party had told SaharaReporters that the “APC is torn between (Yemi) Osinbajo, (Bola) Tinubu and Emefiele’s people, each pushing their own candidate and agenda.”

Recently, Emefiele’s supporters, mainly youths, spotted white T-Shirts with the inscription MEFFY 2023 at an occasion held in Lagos to draft him into the race.

Buhari to EFCC: Avoid Being Used for partisan politics