The Senator representing Ogun Central Senatorial District, Ibikunle Amosun has broken his long silence, saying, decision on the crisis rocking the All Progressives Congress in the state would be taken in few weeks . 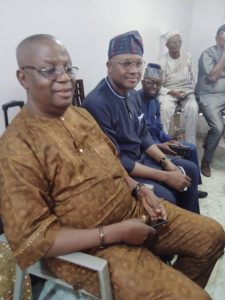 Amosun who was described as the rallying point for his loyalists who attended the just concluded convention,asked his loyalists to be prayerful on the next move and the state of the party in the state .

The former governor in a statement issued by the Publicity Secretary of his factional APC , Wole Elegbede was reported to have met with the delegates on Sunday in Abuja .

The statement read “the Senator representing Ogun Central Senatorial District and the rallying point of APC in Ogun State, Senator Ibikunle Amosun on Sunday, March 27, 2022, visited the delegates to the APC National Convention in Abuja and beseeched them to be prayerful about politics in the State.

“Amosun, who was accompanied by the two other senators from Ogun State, Senators Tolu Odebiyi and Lekan Mustapha of Ogun West and Ogun East Senatorial districts respectively, said he was amazed by the sterling and strong support which the delegates demonstrated at the convention.

“I am so proud and happy about you. Your standing amazes me. In the next few weeks, we will see the true picture of things in of politics in the state” Amosun told the delegates.

“In his remarks, Ogun State APC Chairman, Chief Derin Adebiyi, eulogised Amosun for his consistency and gallantry in Ogun politics, saying he has shown the leadership worthy of emulation.

“Adebiyi opined, anybody that does not recognise the quality contribution of Senator Amosun to the politics of Ogun State and Nigeria must be drown in a huge jokes”.

“He thanked Senators Odebiyi and Mustapha for remaining steadfast with the leadership of Senator of Senator Amosun, saying they have shown the characteristics of humility and dogged determination that their fathers are well renowned for.

“Both Senators Odebiyi and Mustapha asked APC members to be patient, adding that Senator Amosun is not fighting for himself but his followers and they will soon reap the rewards.

I Am A Thief Not Armed Robber, Says Ogun Robbery Suspect

I Am A Thief Not Armed Robber, Says Ogun Robbery Suspect