It was a convergence of media practitioners, communication scholars, staff and students on the Mafikeng campus of the North-West University as the legengary broadcaster and famous isiXhosa language news anchor, Dr. Noxolo Grootboom delivered the 2022 edition of the Indigenous Language Media in Africa (ILMA) Research Entity’s symposium tagged “Indigenous Language Broadcasting”. 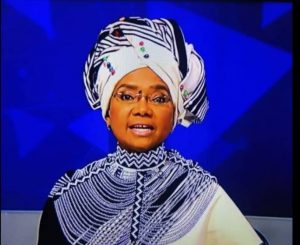 The media guru, who moved from grass to grace; from the the position of a typist to a celebrated broadcaster, blamed policy makers in the broadcast industry for the pace at which indigenous languages are dying on the continent of Africa, arguing that forgetting one’s language is tantamount to forgetting one’s heritage. “Indigenous language tells you more about whom you are, your language connects you to your soil and as well conects you to your ancestors”, she noted.
Dr. Grootboom, whose career, she said, was shaped during the apartheid era in South Africa noted that it was the most challenging period in her career as a journalist “because working with pure white colleagues at the SABC was very discomforting. Many thanks to democracy which bridged the gap of discrimination against the black. This period ushered-in high level of professionalism from the black people, with brilliant personnel who introduced indigenous languages into the system”, she added.
“Giving room for indigenous languages in news bulletin and programmes is still a critical issues at the SABC where I left and other broadcast media. Casting and presenting news in my mother’s tongue for decades is what I won’t take for granted. My philosophy of broadcasting was to make other people love my language, isiXhosa; to ensure it is a language to behold. Hence, being a broadcaster wasn’t for money but to propagate my language. Therefore, news and content producers should use minimum resources available to fight for the survival of indigenous languages for the sake of generations unborn”, Dr. Grootboom submitted.
It could be recollected that the South African President, Cyril Ramaphosa shifted his time of national broadcast by 30 minutes in order to honour Noxolo Grootboom, as it coincided with her last news bulletin on air which marked the end of a 37-year career in broadcast television. “This national honour was one of the most memorable days in my life because that moment will linger for a long time in my memory, Grootboom enthused.
The guest speaker, therefore, commended ILMA for dedicating so much resources to the promotion of indigenous languages. She urged broadcasters and media managers generally to embrace and acknowledge indigenous languages by making conscious decisions in allotting enough airtime to indigenous languages, with a plea to government and policy makers to place indigenous language broadcasters on the same pedestals with their English language counterparts.
Earlier in his welcome address, the Director of ILMA, Prof. Abiodun Salawu said the programme was organised in order to spread the tentacles of indigenous language media beyond the shores of Africa, with a call on stakeholders to cooperate with the Research Entity in its philosophy of promoting indigenous languages and continuous promotion of African culture and tradition.
“Dr. Noxolo Grootboom is a cultural ambassador; a highly cerebral broadcaster and a veteran media practitioner of note. Am sure we shall benefit from her wealth of experience. It is indeed a privilege for having her around us”, he added.
In his closing remarks, the Deputy Dean, Teaching and Learning, Faculty of Humanities, Prof. Mpho Chaka noted that the symposium came at the right time, as the lecture did not only communicate but also spoke to those in attendance.
Prof. Chaka added that the primary duty of the Faculty is to make meaningful future out of the curriculum for the students, part of which is the promotion and preservation of indigenous language in Africa. “If we fail to do this, history may not judge us well”, he said.
Other personalities present at the symposium include the Executive Dean, Faculty of Humanities, Prof. Dumi Moyo, Prof. Hove, Prof. Gilbert Motsaathebe and Prof. Paul Nkamta as well as staff and students of the University.