OLUWATOSIN ADEWUNMI reports on environmental challenges in Bayelsa State. Her story focuses on fishing and how it affects the livelihood of residents.

Hitherto known for the large number of fishes harvested from its numerous bodies of water, Amurukeni community was one of the choice areas for fish farmers in Ogbia Local Government Area of Bayelsa State.

But over the years, its fishing stock has depleted such that only a few people are interested in fishing in lakes and rivers in the community which shares borders with Rivers State through the Amurukeni forest.

In the 80’s, according to a community leader, Dennis George, people did not store fish stocks in their house. They ate from proceeds they made from the rivers since they were artisanal fish farmers.

“When our mothers wanted to cook back then, they didn’t store fish in the house. They will just go to the bank of the river and set their traps.

“And between three to five minutes, they have already caught a big fish for the meal. That is how fishing was before in this community,” George said.

The situation is no longer the same in the rural Amurukeni community about 40 years later.

“Even if you set a trap for a whole day you might not catch fish in the river,” a perturbed George said.

The depletion in fishing stock has continued to cause untold hardship for the the residents of this community as they now depend on other animal sources for natural protein diets aside affecting their means of livelihood.

Some of the residents interviewed by this reporter hinged the depletion of fish stocks on various factors, such as oil spillage, flooding and over-fishing by members of the fishing community. 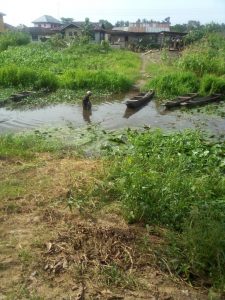 According to the National Oil Spill Detection and Response Agency (NOSDRA), an agency under the federal ministry of environment in Nigeria responsible for documenting oil spills in the country, there are 846 incidents of oil spill – largely caused by sabotage and theft, equipment failure and corrosion —— between 2019 and May 2021. Similarly, the country’’s Ministry of Environment stated that there have been approximately 5,000 documented cases of oil spillage just in the past six years.

In late 2021, the Nigerian Senate, the country’’s highest law making entity,, passed a resolution stating that an oil spill, which lasted for about 36 days, in neighboring Nembe Local Government spewed about two million barrels of oil and gas equivalent into the Niger Delta creeks and mangrove swamps. The Senate also noted that after decades of gas and oil exploration, the Niger Delta, which is also home to Oloibiri where oil was first discovered in 1956, is among the most polluted areas on earth.

This declaration conforms with the on-the-ground findings by this reporter. A resident of Amurukeni who identified himself as Friday Ewa told this reporter that ““fishes in the river cannot adapt with spillage;; they get polluted and die. 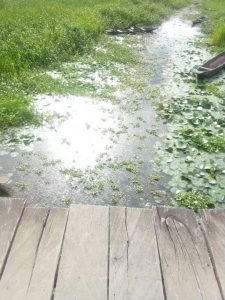 ““Rivers in Amurukeni are sometimes polluted by crude oil. Oil spillage really affects the livelihood of people living in Bayelsa. It is affecting our water, our lands from growing some farm crops, and the government is not helping matters,”” Ewa said.

A recent report by Aljazeera noted that the oil-rich Niger Delta region has accounted for an overwhelming majority of Nigeria’s earnings, turning the country into Africa’s largest oil producer since the 1970s. However, the region continues to suffer the multiplier effect of decades of environmental degradation, which has eroded livelihoods and deprived residents of basic essentials such as access to clean drinking water.

According to the report’s findings, mangroves and swamps in Niger Delta have become uninhabitable for many species, and the average human life expectancy is also 10 years lower in the region than elsewhere in Nigeria. A submission that also butteresses the declaration by the Nigerian Senate.

Speaking further on the on-the-ground experiences of residents, Ewa revealed that erosion also causes pollution inside the rivers since “mud always accumulates inside the rivers. So, if it is not removed yearly, it can block the fishes from flowing through the river.”

He also stated that: “The river is gradually reducing from what it used to be before now. Big fishes cannot live in a habitat where only a little amount of water flows. So they spread to bigger rivers for survival, more so if the river is filled with water lettuce and water hyacinth.”

On the part of another resident, Segbami Joseph, she lamented that residents like her have resorted to alternate means to get protein diets, which they normally get from fishes.

“The climate also changes due to the presence of too much carbon, dewfalls and sometimes makes the fishes swim away,” she said. “Another thing is flooding. Whenever we have a flooded year, we don’t have fish until the flood is over.”

Joseph did not also rule out human activities that pollute the water and affect the marine lifestyle. She explained further that people throw all sorts of things inside the river, adding that such activities have “caused more harm than good to the rivers.” 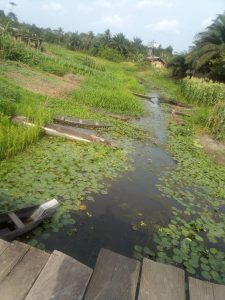 It will be noted that oil spillage earlier discussed is sometimes caused by human activities. Recent reports confirm that Nigeria loses some 150,000 barrels of oil daily to illegal tapping of pipelines.

Fishing routes in Bayelsa State must be protected — Gov Diri

It was for this reason that the Bayelsa State government called on the Federal Government and operators of the oil fields in the state to immediately take action on oil spillage, which according to him has immediate and long term effects on the health of residents.

The Bayelsa State Governor, Douye Diri, said this when he visited the OML 29 Well 1 platform — operated by Nigeria’s largest indigenous oil firm, Aiteo Exploration and Production Company Limited — in Nembe LG which spilled an estimated two million barrels of crude into the Santa Barbara River for about one month.

While describing fishing as the source of livelihood of the people of the area, Diri equated grazing routes to the fishing routes in Bayelsa State that “must be protected.”

“Our people are endangered. Our people’s source of livelihood is endangered. I empathize and sympathize with the people of Nembe on behalf of the government and people of Bayelsa State.

“I like to give you hope that we will stand shoulder to shoulder with you. Your government will activate every constitutional means to arrest and redress this magnitude of oil spill.

“I therefore call on the Federal Government, the operators of the oil field, NNPC and AITEO to immediately look for a superior technical know-how to contain and stop the spread of the oil.

“For Bayelsa, the only thing we know how to do best is fishing. Today, our own fishing route is endangered. I equally call on the Federal Government to immediately react and ensure that our fishing route is safe,” the governor said.

It will also be recalled that in 2021, the Court of Appeal in The Hague, Netherlands ordered Shell Petroleum Development Company of Nigeria, a subsidiary of British-Dutch multinational Royal Dutch Shell, to compensate a small group of residents in the Niger Delta region and to start purifying contaminated waters within weeks after finding it liable for oil spills in the region between 2006 and 2007. 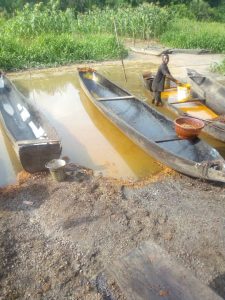 The ruling was adjudged one of the finest in the region’s quest for redress against years of land degradation and pollution of its waters by oil companies. Experts are of the opinion that judgements like this are bound to help the region recover its decades-long losses.

While condemning the negative and catastrophic effect of oil spillage on fishing communities, an environmental expert and Principal Consultant, Enviromax Global Resources Limited, Mr Gboyega Olorunfemi, said “sources of water for cooking, drinking and washing for the community are contaminated and livelihood impacted,” thereby “leading to increased cost of living and a deleterious threat to the marine ecosystems.”

Mr Olorunfemi explained that “the spill affects the thriving of flora and fauna; it creates a decline in fish production, thereby putting pressure on the food system and livelihood of the people living in the affected communities. The fish population, which could have served as a boost to the economy of the communities, are severely threatened and endangered, and of course become less economically viable. Children and women are the most vulnerable to these impacts trying to survive and cater to the immediate need of the family, and men are faced with the hard task of providing for the families.

“Over the years, there seems not to be an end to oil spillage in these communities. Despite playing host to the exploration companies, many of these communities have been degraded as a result of reckless operations with less concern for safety and exploration protocols to ensure zero spillage.

“The Bayelsa communities and every other community where oil is being explored deserves our collective empathy. I read last year how about 15 communities came out to complain that they can no longer breathe, and dying of hunger including all forms of illness after an estimated two million barrels of spilled crude took over their creeks and caused fishing expeditions to cease,” he added.

On steps needed to forestall future occurrences, Olorunfemi said: “While cleaning may be initiated after spillage, every company exploring must ensure a contingency plan that will proactively prevent oil spillages at all cost rather than a reactive and quick response posturing to correct any spill.

“No amount of payment for loss and damage would be enough to restore life, and compensate for flora and fauna loss.

“Oil spillage is an accident that must never occur in this age of fourth industrial revolution and proliferation of use of Internet of things (IoTs) in the oil and gas sector. Our coastal communities must enjoy maximum protection to achieve the UN Sustainable Development Goals.”

The report was sponsored by I-79 Media Consults under the ‘Rewriting the Narratives of Environmental Crimes in Nigeria’ project which is supported by the Environmental Reporting Collective (ERC).