No Rape Incident In FPI – Rector

The management of the Federal Polytechnic, Ilaro, Ogun state ,has debunked the rape allegation of female students as reported by some media organization, not PLATFORM TIMES. 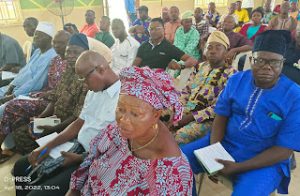 The Polytechnic management urged journalists to confirm issues from concerned authorities before releasing information to the public.

Rector of the Polytechnic, Arch Olusegun Alukosaid this while speaking during a stakeholder’s meeting with heads of security agencies on Monday, denied the rape allegation.

The Rector assured students of the Polytechnic adequate security, noting that the situation is under control.

“I want to debunk the issue of rape. There were no rape cases. The issue of POS is important we take drastic action in residential areas because they are prone to attack and attract robbers. I want to assure the students, we are on top of the situation.”

The Rector noted that the rampant robbery incident was a result of poor security arrangements by landlords of the densely populated students areas despite the exorbitant fees charged by the landlords and caretakers.

He said when the first incident broke out, the Polytechnic management visited the affected areas and recruited 15 local vigilantes to support Police in the areas.

He, however, refuted the rape allegation of female students as speculated on social media, saying no student was raped.

The Rector emphasized that investigation by the Polytechnic’s fact-finding team revealed that, Point of Sale (POS) operations in the affected areas attracted the robbery attacks, calling for drastic action against their operation in residential areas.

“What is happening in Ilaro recently is a strange thing to us and as Polytechnic we are highly concerned. We commend the effort of the security agencies at ensuring that our students are safe. We have not been sitting idle on our side.

“When the first incident happened, we employed 15 vigilantes to complement the effort of the security on the ground.

“We were there on Saturday and observed what happened, as part of the steps taken, we have some hotlines for our students to call when there are issues like this that allow them to give information. But to our surprise, we discovered that 90% of the students don’t have the numbers.

“When the issue started gathering momentum, the NANS came to find out what went wrong, every student has the right to protest, but that does not solve the problem. I thank the NANS Chairman in the state for his dogmatic approach to dousing the tension.

“I want to debunk the issue of rape. There were no rape cases. The issue of POS is important we take drastic action in residential areas because they are prone to attack and attract robbers. I want to assure the students, we are on top of the situation.”

Some of the CDA Chairmen who spoke at the meeting blamed the robbery incident on the students’ night crawling, display of affluence, the use of expensive phones and gadgets, engaging in free fraud practices, otherwise known as yahoo- yahoo, and use of generators for almost 24 hours daily.

According to the Otun Akeweje of Ilaro Yewa, Chief Akeem Okebunmi the students disrespected rules, regulations, and customs of the Polytechnic as well as that of the host community among others.

The outgoing Students Union President of the Polytechnic, Azeez Uthman called on the traditional rulers to tackle the robbery incident in a traditional way.

He advised the management to revert to online classes and send the students home until the situation receive positive intervention.