Don’t Use Android Phone To Camera Me; Use Only iPhone 13” – Portable Warns Fan

Popular Nigerian singer, Habeeb Okikiola popularly known as Portable , has expressed his love for apple phone as he was captured warning a fan to desist from using an Android Phone to film him. 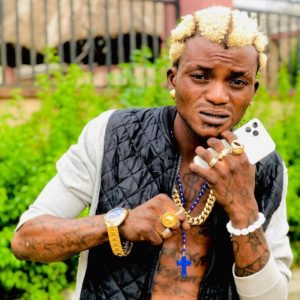 In a recent video making rounds on social media, the singer was spotted at a fashion store where a fan attempted to take a photo of him with an Android phone.

“No use Android phone camera me oo. Use only iPhone 13”, Portable responded after spotting the fan pulling a smartphone on him.