Do Your Job With  Human Feelings, Not Bitterness – FRSC Tells  Newly Promoted Marshals

The Federal Road Safety Corps (FRSC) has admonished newly promoted marshals at its Idiroko unit command to do their job with human feelings and without bitterness. 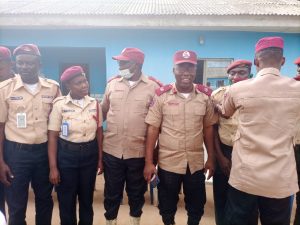 The Commander of the Idiroko Unit Command, Assistant Corps Commander Akinwunmi Olaluwoye gave this counsel on Thursday while decorating 13 newly promoted marshals at a ceremony held at the command’s office at Idiroko in Ipokia Local Government of Ogun State. 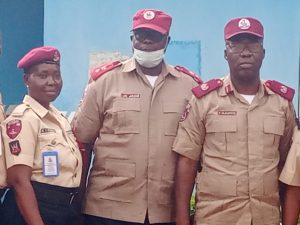 “To whom much is given, much is expected. This promotion is a call to service for you to do more. You must avoid insults, and temptations of money will come.”

“Be godly in the discharge of your duty. Don’t tell people that you will deal with them. Nobody can deal with anybody.”

ACC Olaluwoye who took time to eulogise the newly promoted marshals gave a vivid account of the qualities that made them merit the promotion.

“CRMA Khadijah Folarin is a wonderful fellow who I met in Abeokuta in 2010 and has remained dedicated, lovely and hard-working. I don’t doubt her promotion if she has been diligently taking care of our report.”

The unit commander extol virtuous of the marshals for their loyalty, dedication, truthfulness, reliability, efficiency, and productivity.

While giving the vote of thanks, the Unit Head of Operations, CRC John A Jachi urged the officers to make good use of their new ranks to achieve the vision of FRSC.

As beneficiaries of this promotion, I want you to do your work as expected of you And on behalf of FRSC, we are grateful and pray that at the appointed time, God will decorate all when it matters most.
####