Protests have hit the selection process of the next Olowu of Owu kingdom in Abeokuta, Ogun State over alleged plan by the Kingmakers to choose a native of Ibadan as the new Olowu of Owu . 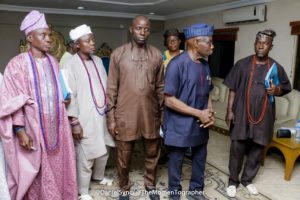 PLATFORM TIMES gathered that Prince Saka Matemilola has been selected by the Kingmakers as the next Olowu during a secret election after the screening of the candidates.

PLATFORM TIMES further gathered that only Obasanjo voted otherwise while all the Kingmakers reportedly cast their votes for Matemilola before the list was sent to the governor for approval .

Matemilola is one of the seven princes screened by the Owu kingmakers led by former President, Olusegun Obasanjo on Wednesday 30th March, 2022.

They were nominated by the Otileta Ruling House, the next in line to produce new Olowu.

The seven candidates include an Archbishop of Methodist Church of Nigeria, Dr. Adegbemi Adewale with 1027 scores at the end of the Ruling House selection, he holds a doctoral degree in African law of the University of Ibadan and from Ile Aderinoye, Princes Adelani Oladimeji from Ile Omoleefon, and a Registered Town Planner; Dr. Saka Matemilola, a Fellow of the Nigerian Society of Engineers with a Doctoral Degree from University of Cambridge from Ile Soke and Olatidoye Olaniyi, a Retired Permanent Secretary in Ogun State Civil Service from Soke.

Others are Prince Adeyanju Bakinson a Registered Town Planner from Ile Otopo; Simeon Soyele a Veteran Journalist from Ile Lumosa and Adesina Adelani a Project Management Consultant from Ile Soke.

Obasanjo who is the Balogun of Owu on March 30, led other Kingmakers in a seven- hour statutory selection process which should produce the next Olowu of Owu Kingdom.

At the end of the screening, It was gathered that the kingmakers had forwarded their report to Governor Dapo Abiodun who is expected to announce the next Olowu of Owu Kingdom.

Challenging the move , a Prince, Tajudeen Adelani and a Princess, Aminat Adesina, from two royal families, have separately petitioned the Ogun State Government, warning against appointment of Matemilola as the Olowu of Owu who they described as a non-indigene of the Owu kingdom.

The two petitioners from the royal families have asked Governor Abiodun and Obasanjo-led kingmakers to be wary of appointing a “non-indigene” as the next Olowu of Owu kingdom.

Adelani , a delegate representative of Ile Omoleefon, one of the compounds that make up Otileta Ruling House, while the female petitioner, Princess Aminat Adesina is is the Secretary of Aderinoye compound in the same Ruling House.

Adelani and Adesina in their separate petitions to the Ministries of Justice, Local Government and Chieftaincy Affairs, said Matemilola “is a native of Ibadan in Ibadan North East Local Government Area of Oyo State”, making him ineligible to the throne of the Olowu.

They insisted that the candidate had alluded to his Ibadan indigeneship in an affidavit he swore to dated May 15, 2000, at the High Court Registry, Port Harcourt, Rivers State.

Photocopies of the affidavit attached to the separate petitions as acknowledged by both Ministries of Justice, Local Government and Chieftaincy Affairs, were obtained by our correspondent in Abeokuta.

Adelani, in his petition, pointed out that “In the form submitted by Prince Saka Adelola Matemilola, it was discovered that he is not from Ile Soke which he claimed (evidence attached) but the house and the kingmakers did not take cognizance of it.”

He added “This to us is a criminal offence and we should not allow a criminal to become our king.”

On her part, Adesina said Matemilola is “unqualified being a non-indigene” to the throne and appealed to Governor Abiodun and the kingmakers to “stop the desecration of our customs and tradition in Owu kingdom.”

When contacted, Matemilola described the affidavit where he swore to being a native of Ibadan as “correct and consistent.”

He, however, declined further comment on his alleged non-indigene of the Owu kingdom.

Matemilola said “What I am saying is that affidavit is absolutely correct and consistent and I also have birth certificate to it which shows I was born in Ibadan. So, just check the consistency of that, check the meaning of the word ‘native’ as oppose to the word ‘indigene,’ then do your story.

“Apart from that, no other reaction from me.”

The Olowu stool became vacant, following the demise of the late Oba Adegboyega Dosumu, who joined his ancestors in December 12, 2021.

Many injured as Islamic clerics, hoodlums clash in lagos

Many injured as Islamic clerics, hoodlums clash in lagos