After his recent music tour to Kenya, UK, Turkey and now in Dubai ,Nigerian Singer and Zazoo crooner, Habeeb Okikiola, popularly called Portable has bragged that he can never go broke . 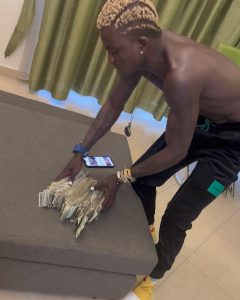 Portable was seen showing off a huge sum of foreign currencies in a video, which he claimed were made legitimately through his Music and a final answer to his long term prayer to make money in life. 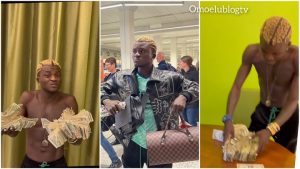 The artiste who calls himself an expensive O. G brags that he can never experience “Sapa” again, a street slang for being financially broke, and the success of this music career tour ends his long term struggle with poverty. 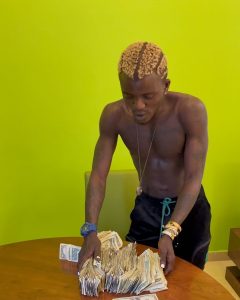 Portable Habib Olalomi broke into the Nigerian music scene towards the end of 2021, with the song Zazoo featuring Olamide and Pocolee.

Before December 2021, fans knew little or nothing about Habeeb Okikiola, now famous as Portable.

The 27-year-old Sango Ota-based singer stumbled into fame with the release of his hit song, Zazu Zeh, which gradually won the heart of fans and quickly grew into fans’ favourite song.

Since its release on December 14, 2021, the song ‘Zazu Zeh’ has amassed 6.6 million views on YouTube and is one of the most played songs on Spotify, an online audio streaming platform.

Little wonder, Portable felt the song was deserving of a Grammy award.

A few days after the song’s release, Portable shot into the limelight, allowing him to share a stage with Tiwa savage at the Livespot X concert on Friday, December 17.

Five Days After, Another Two-Storey Building Collapses In Lagos

Five Days After, Another Two-Storey Building Collapses In Lagos