Dr. Ngozi Okonjo-Iwella, Director General of the World Trade Organization and a former Minister of Finance under the government of Dr.Goodluck Jonathan has accused ex-president of the Senate, David Mark; former Speaker of the House of Representatives who is  now governor of Sokoto State, Aminu Tambuwal; and other members of National Assembly of collecting a whooping sum of  N17 billion bribe before the 2015 Budget was passed. 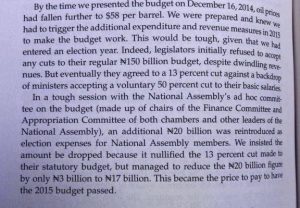 Okonjo-Iweala, Nigerian-American economist, disclosed this shocking revelation in her book: “Fighting Corruption is Dangerous: The Story Behind the Headlines.”

The former Minister said the bribe money, which was added into the budget was N20 billion initially, but was reduced to N17 billion.

She added that the N17 billion was padded into budget as election expenses.

She said: “By the time we presented budget on December 16, 2014, the oil prices has further fallen down to $58 per barrel. We were prepared and knew we had to trigger the additional expenditure and revenue measure in 2015 to make the budget work. This would be tough, given that we had entered election year.

“We insisted that the amount should be dropped because it nullified the 13 percent cut to their statutory budget, but managed N20 billion figure by only N3 billion to N17. This become the price to have 2015 budget passed.”