Research by the United Nations supports that infant could develop allergies if exposed early to milk asides the bread milk.

According to the World Health Organization, Globally, 3 in 5 babies are not breastfed in the first hour of life; Over 820 000 children could be saved yearly if all children 0-23 months were optimally breastfed and Only 41% of infants under 6 months of age are exclusively breastfed.

Oyedele in an interview with PLATFORM TIMES highlighted the importance of breast milk for an infant calling on Nigerian mothers to breastfeed their babies exclusively. 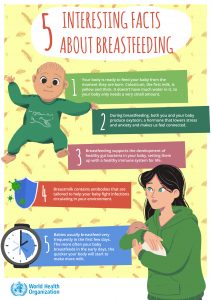 “For the family, it saves money and time. It protects the baby from diseases. It is always available at the right temperature. It makes mothers bond well with their babies. It helps the mother to lower the risk of breast cancer, high blood pressure, diabetes, and cardiovascular diseases.

“It also helps to reduce the risk of uterus and ovarian cancer. It helps in child spacing because while breastfeeding, ovulation in some mothers may stop till they stop breastfeeding. So, they won’t get pregnant while nursing a baby.”

“stress is one of the factors that hinder mothers from breastfeeding their children. When a working mother is stressed, then the production of breast milk may decrease. And if such happens, the mother will not be able to breastfeed her child well enough and will want to go for formula milk.

“Hormonal imbalance is another factor. For example, a mother that has fibroids or diabetes may not be able to produce much milk compared to a healthy mother.

“The mother’s perception sometimes hinders breastfeeding. The mother might feel the breast milk is no longer enough for the child and because she feels the breast milk she is producing is not enough, introduces water and formula milk.

“We have cases of mothers that are cautious of their body. They do not want saggy breasts. So, those mothers rather go for formula instead of giving their children breastmilk. We have mothers that have misconceptions that formula milk is equivalent to breast milk. So, they will say why not give formula instead of breast milk. So, these are some of the factors that hinder some mothers from breastfeeding their children.” While admitting that formula milk is also healthy she however cautioned against it except if medically recommended for a child.

“There should be public enlightenment also. Where the public has to be enlightened from primary to secondary school students down to the adults. Students should be taught the role of breastfeeding in nutrition and reproduction. This should be introduced in subjects like Home-Economics.

“Schools have to go further to teach breastfeeding in classes to prepare them ahead. So, that they can know how important it is for them to breastfeed their babies when they grow up. There should be maternal legal rights where mothers should be given leave. They should be given a certain number of days to care for their babies. “Mothers should be educated to feed their babies as long as the baby wants. A baby can feed up to eight times a day, it is normal and good.”

Monkeypox is not generated in Nigeria, NCDC replies Russia

WHO: Tobacco kills over 15,000 people in Cambodia annually

WHO: Tobacco kills over 15,000 people in Cambodia annually