‘Whoever smokes is on the path to suicide, murder’

The Chairman, Association of Nigerian Private Medical Practitioners ,Ogun state chapter,Dr. Rabiu Kusimo has said that smokers are on the path to suicide and murder. 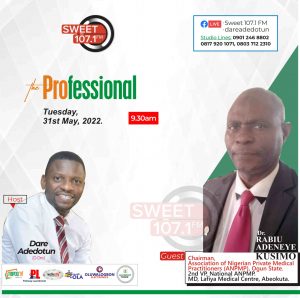 Kusimo said smokers are not only gradually killing themselves but also people around them who inhale smoke they puff off into the air.

He started this Tuesday while featuring on a weekly program tagged “Professional” on Sweet FM 107.1 Abeokuta as Nigeria joined the rest of the world to celebrate the year 2022 World Tobacco Day.

Meanwhile, the World Health Organisation has raised the alarm that over 8 million people die every year from smoking tobacco.

“When you smoke and you puff around, whoever passes that place is also passively smoking. If you smoke in the market everybody around you is also smoking. So, you are committing suicide alongside murder because you are sending people to their early graves.”

He added that being the component of tobacco is like gum, saying that when it is burnt and smoked, the smoke settles on the lungs.

“The main constituent of tobacco is Nicotine. Nicotine is like gum. Nicotine when it is burnt and the smoke gets to a place, it passes through the lungs. Because when you breathe in the air the last bus top is the last place in the lungs.

“So, the flames of air with Nicotine that you’ve taken in will settle in the lungs. It causes permanent damage gradually or progressively and this leads to cancer.”

WHO in a report published on its website on Tuesday titled ‘World No Tobacco Day 2022’ released for its yearly campaign against the consumption of tobacco, May 31. 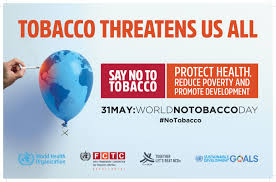 The report also warned that tobacco production is also harmful on the environment.

The report in parts, “Tobacco growing, manufacturing and use poison our water, soil, beaches and city streets with chemicals, toxic waste, cigarette butts, including microplastics, and e-cigarette waste. Don’t fall for the tobacco industry’s attempt to try and distract from its environmental harms by greenwashing their products through donations to sustainability initiatives and reporting on environmental ‘standards’ they often set themselves.

“The tobacco industry is making profit by destroying the environment and needs to be held accountable for the environmental destruction and made to pay for the waste and damages, including to recover the cost of collecting these wastes.

“Every cigarette smoked or tobacco product used wastes precious resources that our existence depends on. Quit tobacco for your health and the health of our planet. Tobacco smoke contributes to higher air pollution levels and contains three kinds of greenhouse gases.”

To reduce the environmental effect of tobacco, WHO advised the government to empower tobacco farmers so as to switch to other crop farming.

“Governments and policy makers should support tobacco farmers to switch to alternative, more sustainable livelihoods to reduce the environmental impact of tobacco growing, curing and manufacturing while continuing to implement tobacco control measures.”

The Federal government of Nigeria said that about 26,800 deaths related to tobacco smoking were recorded in Nigeria.

The National Coordinator, Non-Communicable Diseases Division of the Federal Ministry of Health, Dolapo Sanni, disclosed in Abuja, at the launch of a research report on tobacco taxation and health financing in Nigeria.

Sanni, represented by Bunmi Oshundele of Monitoring and Evaluation, NCDs, said the tobacco epidemic is one the biggest public health threats the world has ever faced describing the deaths from tobacco in Nigeria as huge, said 4.5 million Nigerians in the range of 15 years and above, used tobacco products.

‘‘3.1 million are current smokers while 1.6 million adults currently use smokeless tobacco products. With this, more than 26,800 annual deaths come from tobacco-related diseases in Nigeria,” Oshundele said.